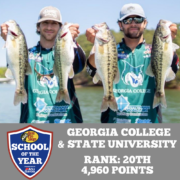 SAN ANTONIO, TX (4/27/2020) – It’s time for another new installment of our series highlighting the Top 25 ranked schools in the Bass Pro Shops School of the Year presented by Abu Garcia.  Each week leading up to the year-end Championship, we will be highlighting five schools a week starting with 25th and working our way all the way up to 1st place in the School of the Year standings.  This week we will feature the teams ranked 16th-20th.  Today we will begin with the 20th ranked school, Georgia College & State University.

Located in Milledgeville, GA, the Georgia College Bass Team has put themselves on the map this year during the 2019-2020 season.  The young team has accumulated a total of 4,960 points over the past 11 months.  Being ranked inside of the Top 20 was the goal for this team entering the season.  “Our team’s goal for this season was to finish in the Top 20 for School of the Year points.  I’m really proud of our team finishes so far and our efforts to fish every tournament,” said Noah Campbell, Georgia College angler.

Noah has helped contribute to his team’s success this season.  At the Texas Lunker Challenge presented by Mossy Oak Fishing on Sam Rayburn Reservoir back in February, he had a Top 50 finish with a bass weighing roughly two and a half pounds.  Combined with another Top 50 finish from his fellow teammate Cole Landreth, Georgia College earned a total of 1,070 points at the most recent event on the Bass Pro Shops Collegiate Bass Fishing Series.

Since that event in late February, the collegiate bass fishing tournament scene has been put on hold.  The Bass Pro Shops Big Bass Bash presented by Berkley on Kentucky Lake was originally scheduled to take place in early March but has since been rescheduled for mid-September due to concerns regarding the COVID-19 virus.  Now entering the second month of safer at home initiatives, college anglers are itching to get back out on the water and compete again.

“For the Championship on Pickwick in May, I think I speak for our whole team when I say, ‘We just can’t wait to go fish.’  We have all been trying to find tournaments to fish, and some of us have even made pot tournaments, but with the virus that’s going on it’s been tough,” noted Troy Harris, Georgia College angler.

The next scheduled event for the ACA is the BoatUS Collegiate Bass Fishing Championship presented by Bass Pro Shops on Pickwick Lake in Florence, AL.  The Championship is set to take place May 21st-22nd.  This time of the year on the Tennessee River can produce some of the best ledge fishing this river system has to offer.  “I cannot wait to ledge fish,” explained Campbell.  “I haven’t had the opportunity to do it yet this year, so that’s definitely what I’m most looking forward to about Pickwick,” he continued.

Fish stack up out on the ledges following the spring spawning period.  The Georgia College anglers are very familiar with this fishery and are confident about their chances to win a National Championship on Pickwick Lake in just a few weeks.  “Always fun to find ledges with 20+ fish on ‘em,” added Harris.  “We think we could make a push to win that tournament.”

Late last week, the ACA released a statement updating everyone on the status of the event.  Read that article here.  A further update will be provided one week from today on Monday, May 4th.