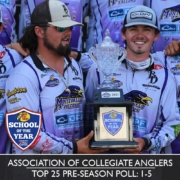 San Antonio, TX (7/23/2021) – The Association of Collegiate Anglers, which operates the Bass Pro Shops School of the Year program presented by Abu Garcia, is excited to showcase the pre-season rankings for college bass fishing, according to a voting poll of top coaches, schools, media personnel, and fishing industry personalities with experience in college fishing.

This poll is a one-of-a-kind poll, similar to rankings in other college sports, that will help kick off the season-long race for the prestigious School of the Year title.   Every day this week, the ACA will count down and showcase teams that made it into the Top 25, and then in the near future, the first rankings for the 2021-22 season will be announced based on finishes during events this summer. Today’s article will show teams that were selected 1st to 5th in the pre-season rankings.

Topping the list in the ACA Top 25 Pre-Season Poll is the University of Montevallo, winner of the 2021 Bass Pro Shops School of the Year presented by Abu Garcia.  Montevallo put together one of the best seasons in collegiate 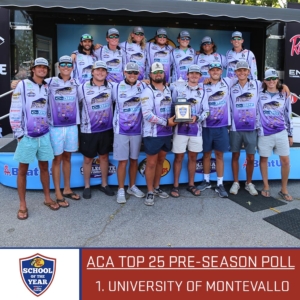 bass fishing history by earning a record 18,415 points during the 2020-21 season.  It should come as no surprise that coaches, anglers, and media members view the reigning School of the Year winner as the frontrunner to repeat.

“We are honored that the college fishing community thinks this highly of our program to rank us in the top spot,” said William Crawford, Head Fishing Coach at the University of Montevallo.  “Our guys have worked really hard over the last few years to be one of the best, so I am happy that all of their hard work is paying off.”

At every tournament last season, it seemed as though Montevallo had a team in the Top 10 of the final standings.  Montevallo team members won both the ACA Pickwick Slam and 2021 Bass Pro Shops Big Bass Bash presented by Berkley, as well as Top 12 finishes at both the 2020 Big Bass Bash and 2020 AFTCO Open.  Capitalizing on these double points opportunities proved crucial in helping Montevallo to edge out back-to-back School of the Year winner McKendree University.

Not only does Montevallo recruit well, as its team consists of over 30 individual anglers, the defending number one ranked team is returning quite a few anglers from last year’s team.  As we look toward the new season and what lies ahead, expect Montevallo to be a big player towards the top of the standings all season long.

“With a new season you always have a new set of expectations. The goal this year is to keep the team focused and motivated,” added Crawford.  “Anytime you come off of a Championship season, the next year is always tougher. We have to find the guys within our talented roster who want to compete. If we do this, things will fall into place.”

Adrian College finds itself in an extremely familiar position entering the 2021-22 season, and that would be towards the top of the standings.  Coaches, anglers, and media members voted Adrian as the second-best team in 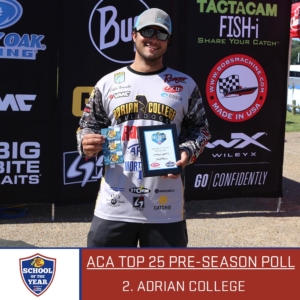 “It’s definitely an honor to be viewed as one of the top collegiate bass fishing teams in the country. We have worked incredibly hard to be recognized as one of the nation’s best programs, but that is all history,” said Seth Borton, Head Bass Fishing Coach at Adrian College.  “Each year presents a new set of challenges, and with each year your team has to redefine its identity. Every year the competition continues to get stiffer and stiffer and each year there is more to overcome to stay at the top. Each of our previous seven teams have helped us lay the foundation for what it takes to compete at a high level, and it falls on the shoulders of each new team to carry that torch.”

Adrian College has finished in the Top 20 for the Bass Pro Shops School of the Year presented by Abu Garcia each of the last six seasons.  More recently, the Bulldogs have finished 3rd overall in each of the past three seasons.  A team that enters the year with the goal of being the number one ranked team at season’s end, Adrian has failed to ever claim the School of the Year title.

The 2021-22 season just might be their year.  Though we have said this for many teams throughout this article series, Adrian College just might lead the pack of teams who have yet to win a School of the Year title that could bring home the trophy when the season ends at Pickwick Lake next May.

“Obviously we would love to finish each season as the ‘School of The Year,’ but there are many factors that we can’t always control that play a big role in that. We plan to continue fishing as many events as possible and rotate through our team members with the most experience and best feel for each fishery,” explained Borton.  “The rigors of the collegiate schedule and academic demands make it difficult to take the most experienced anglers to every event. So, we will continue to stay the course and do everything in our power to put our anglers in the best position to be successful both on the water and in the classroom. There are so many variables that go into a top five pre-season ranking or SOY finish that we really just have to stay focused on each angler being ready to go when their name is called.”

It will be a ‘next man up’ mindset for Adrian College this upcoming season, and each angler in line to see tournament action will be very capable of going out and winning any given event, and based on the fact Adrian College has proven to be one of the best college bass fishing teams in the nation…this year just might be the year for them to raise the trophy.

Up next is one of the most up-and-coming teams in all of collegiate bass fishing, Carson-Newman University.  The team from Jefferson City, TN has continually improved each of the past four seasons and will enter the 2021-22 campaign ranked 3rd based on the input of those participating in the poll.

Here is a quick look at Carson Newman’s progression over the past few years:

Carson-Newman’s growth as a collegiate bass fishing team is extremely evident from this information.  Year after year the team continues to achieve new heights and improve upon its end-of-the-year ranking.

This same fact is noticeable in the voting by pollsters.  Carson-Newman received the least amount of 1st Place votes of the teams ranked in the pre-season Top 5.  However, the team received enough recognition to remain among the Top 3 overall.  This means Carson-Newman was unanimously ranked between 2nd and 5th in many ballots.

One item of note that makes the team’s success even more impressive, is that no team member (or members) has ever won an ACA ran event.  Carson-Newman’s average highest finish at an ACA event during the 2020-21 season was 17th, with a top finish of 4th at the Championship and a team-worst 28th at the 2020 Big Bass Bash.

Carson-Newman made a strong push for the Top 3 in the School of the Year standings just last season.  Though the team did come up short, there is no doubt that 2021-22 could have big things in store for this young group of dedicated anglers. 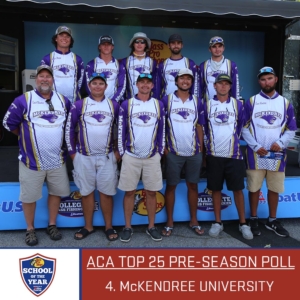 “Being selected by our peers to be in the pre-season top five in School of the Year is definitely an honor.  This selection gives us a great sense of pride and respect,” said Jon Rinderer, Head Coach at McKendree University.  “Our program has always strived to be consistent and finish in the top five.  This preseason poll shows that all the hard work we’ve put into our program is being recognized.”

Some readers may be sitting there and scratching their heads as they try to figure out how McKendree University is not rated higher up in the rankings.  Let’s start by saying that 4th place out of more than 300 bass fishing clubs is nothing to shake a stick at.  McKendree has gone on a recent run that is unmatched by many.  The team had put together a strong core of anglers that complimented each other very well, and that paid off immensely.

But…as the new season is now underway, many familiar faces at McKendree University have recently graduated and are no longer competing on the college circuit.

The 2021-22 season will be an opportunity for other members of the McKendree University Bass Fishing Team to step up to the plate. Coach Rinderer has worked extremely hard to build a national powerhouse, and the efforts set forward on the recruiting trail could be the building block to another historic run for the past School of the Year winners.

Rounding out the Top 5 in this inaugural pre-season poll is Auburn University.  Auburn is one of the few teams in the Top 25 to see a boost in its pre-season ranking compared to where the team finished last season.  After a 15th place finish in 2020-21, Auburn now jumps up 10 places to claim a Top 5 ranking entering the new year.

Following a few bumps in the road during this past season, Auburn caught a hot streak this spring as they went from being ranked outside of the Top 25 to sitting at 15th by year’s end.  The stretch-run Auburn put together over the last few months of the season was among the best in the nation during that period of time.

Auburn’s goal will be to capitalize on that momentum throughout the course of this upcoming season.  Though the first rankings have yet to be released, several events that will count towards the 2021-22 race have already been contested.  Auburn will be receiving points for strong finishes at several major national-level events, including a win at a Bassmaster College Series event in Michigan.

If Auburn can continue to take care of business over the course of the next few weeks, there is a good chance the Alabama-based team could be ranked number one when the rankings drop next month.

Follow this link to view the complete results of the ACA Top 25 Pre-Season Poll, as well as see which other teams received votes by the pollsters.