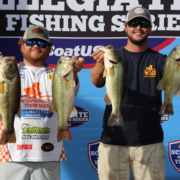 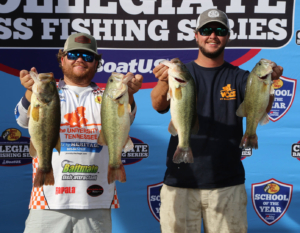 RUSSELLVILLE, AR (October 9, 2021) – Day 1 of tournament competition from Lake Dardanelle for the 2021 AFTCO Collegiate Bass Open is in the books.  216 elite college fishing teams left from Lake Dardanelle State Park bright and early this morning looking to catch keeper fish and position themselves for a shot at the title on Sunday.  Robert Gee & Luke Byerly from the University of Tennessee take the Day 1 lead with 17.25 pounds.  Gus McLarry & Jared West from Texas A&M-Commerce are in second overall with 15.56 pounds, and East Texas Baptist anglers Cody Ross & Cade Nettles sit in third with 14.15 pounds.

Lake Dardanelle yielded a lot of keeper bites for the 430 plus angler field during Day 1 of tournament competition.  Plenty of fish in the two to three pound range were brought to the scales.  Catching a five-bass limit comprised of a kicker fish in the four to six pound class range proved crucial today.

The first place team of Robert Gee & Luke Byerly weighed in 17.25 pounds, anchored by a largemouth bass weighing 5.25 pounds.  That weight was good enough to best second place by more than a pound and a half.  Talking to the duo from 17th ranked University of Tennessee on the weigh-in stage, it appeared evident that they are confident in their ability to go out and duplicate this performance on Day 2.

Sitting in second place are Gus McLarry & Jared West from Texas A&M-Commerce.  The pair from Texas weighed in 15.56 pounds.  They too weighed in a big bass of just over five pounds to anchor their Day 1 bag.  Texas A&M-Commerce enters this event ranked 73rd in the Bass Pro Shops School of the Year presented by Abu Garcia.  A strong finish near the top of the tournament standings will go a long ways in setting them up for a Top 25 run.

Rounding out the Top 3 are Cody Ross & Cade Nettles from East Texas Baptist University.  The team’s five fish limit weighed 14.15 pounds.  Sitting just over three pounds behind the first place team, Ross & Nettles have a shot at threatening the leaders on the final day of competition tomorrow.  ETBU entered this year as the pre-season ranked 23rd school in the country.  With two teams in the Top 5 here at the AFTCO Open, the current ranked 27th best team in all of college fishing stands to make up a lot of ground if they continue this strong showing on Day 2.

Day 2 of tournament competition will begin with launch around 7:00 AM tomorrow morning.  The first flight of boats is scheduled to be due back in at 1:00 PM.  Anglers will be looking to stake their claim to the more than $20,000 in prizes and contingencies up for grabs.  The winner of the event will earn 1,250 points towards the Bass Pro Shops School of the Year presented by Abu Garcia.  Tune in for live coverage beginning bright and early tomorrow, and anglers be sure to hang around to see prizes awarded following the conclusion of weigh-in.