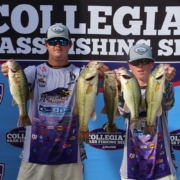 SAN ANTONIO, TX (January 13, 2022) – The Association of Collegiate Anglers has updated the standings for the 2021-22 Bass Pro Shops School of the Year presented by Abu Garcia following a major college event last weekend.  A MLF Southeastern Regional was contested on Friday, January 7th at the Harris Chain of Lakes in Florida.  At this particular event, 1,000 points were awarded to the winner, with points being paid all the way down to 100th place.   Following the conclusion of the tournament, the University of Montevallo has vaulted into 1st place, Auburn University gains valuable points but slides to 2nd, and Adrian College remains in 3rd after gaining no points in this update.

The highest finishing Montevallo team at the MLF Southeastern Regional was the pairing of Nicholas Dumke & Easton Fothergill.  The duo weighed in a five bass limit for 22 pounds 1 ounce to finish the event in 4th place out of 189 teams.  That 4th place finish netted Montevallo a total of 970 points, and boosted the school’s season points total to 8,395.  This marks the first time this season in which Montevallo has been ranked number one in the Bass Pro Shops School of the Year presented by Abu Garcia.

Being in 1st place for the Bass Pro Shops School of the Year presented by Abu Garcia to start the new year is a familiar place for the University of Montevallo.  Just last season at this same time, Montevallo was in 1st place with 8,695 points and leading 2nd ranked Adrian College by 915 points.  In the 2021-22 race currently, Montevallo has earned 300 less points compared to last season’s campaign.  Also, of note, the defending School of the Year winner leads second ranked Auburn University, at this time, by a mere 75 points.

Here is a look at several teams that moved up in the rankings following the vent at the Harris Chain of Lakes:

The first major college fishing event of the new year provided teams with a very valuable points earning opportunity in the race for 2021-22 Bass Pro Shops School of the Year presented by Abu Garcia.  Emmanuel College anglers Seth Jenkins & TJ McKenzie won the tournament with a total weight of 25 pounds 14 ounces.  Earning 1,000 points for their victory, Jenkins & McKenzie helped Emmanuel to move up five places to 12th overall amongst the best college bass fishing teams in the nation.

Though Auburn University did fall from the number one spot, the team earned very valuable points to stay within striking distance of top-ranked Montevallo, as well as distance themselves a bit from 3rd ranked Adrian College.  Conner Crosby & James Cobbs finished the MLF Southeastern Regional in 12th overall.  That Top 15 finish was good for 890 points, growing the margin between them and the next closest team to 980 points.

Two new teams move into the Top 25 following this update.  Lander University, previously ranked 27th, is now ranked 20th overall.  To round out the Top 25, Clemson University moves up from 40th to claim the 25th spot.

Next weekend there will be two major events that will count towards the Bass Pro Shops School of the Year presented by Abu Garcia:

To view a full list of upcoming events that will count towards the 2021-22 Bass Pro Shops School of the Year presented by Abu Garcia, click here.

13 Fishing Continues Partnership with the Association of Collegiate Anglers...