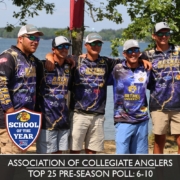 San Antonio, TX (7/22/2021) – The Association of Collegiate Anglers, which operates the Bass Pro Shops School of the Year program presented by Abu Garcia, is excited to showcase the pre-season rankings for college bass fishing, according to a voting poll of top coaches, schools, media personnel, and fishing industry personalities with experience in college fishing.

This poll is a one-of-a-kind poll, similar to rankings in other college sports, that will help kick off the season-long race for the prestigious School of the Year title.   Every day this week, the ACA will count down and showcase teams that made it into the Top 25, and then in the near future, the first rankings for the 2021-22 season will be announced based on finishes during events this summer. Today’s article will show teams that were selected 6th to 10th in the pre-season rankings.

This installment of the rankings begins with arguably one of the most decorated collegiate bass fishing programs in the nation.  Bethel University, who has claimed one School of the Year title and three ACA National Championships, as well as numerous other national level BASS Collegiate and FLW titles, checks in at 6th place in the Top 25 Pre-Season Poll.  Coaches, anglers, and media members acknowledge and respect Bethel University’s dominance near the top of the sport for the past 10 years.

Located in McKenzie, TN, Bethel University anglers have long been the favorites at just about every event nationwide, being even more dominant along the Tennessee River.  Bethel is just minutes from Kentucky Lake, and many of the team’s anglers come to campus with prior knowledge and experience at many of the famous Tennessee River fisheries.

The schedule sets up nicely for Bethel to make another historic run at the title throughout the 2021-22 season.  The biggest question is, ‘Can Bethel replace all the top-level fishing talent that have graduated in the past couple of years?’  Led by head coach Garry Mason, look for Bethel University to once again be making headlines If they can overcome the loss of all the graduates with a fresh crop of anglers this season.

Checking in at 7th overall in the pre-season poll is one of the most successful angler-ran clubs in all of collegiate bass fishing, Murray State University.  Murray is coming off another Top 5 finish last season and enters the 2021- 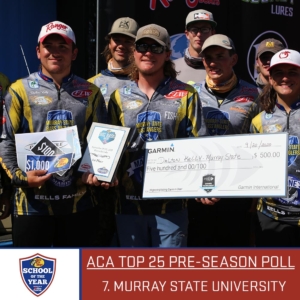 22 race with a great deal of pride and appreciation for what they’ve built.

“It means quite a bit, as we work incredibly hard on and off the water. We are a non-school funded team which gives us freedom to run the club the way we see fit, but it comes with a price,” noted team representatives.  “We have to provide our funding for the team which we do by seeking out sponsors. However, we are very grateful to have some of the best sponsors in the industry. Because of them we are afforded the opportunity to travel, work hard, and perform to the highest level we can.”

Over the course of the last nine seasons, Murray State has finished in the Top 5 of the year-end rankings a total of eight times.  These high finishes in the School of the Year standings are fueled by elite performances at national-level events.  Nowhere was this more evident than at three of the five major ACA events last season.  Here are Murray State’s finishes at the aforementioned events:

The two events not mentioned in this highlight will be what haunts Murray State for quite some time, particularly the 2021 ACA Championship.  Murray State entered that event with a commanding lead of the number three spot, and an opportunity to move up in the standings at the final event of the season.  At the conclusion of this event, Murray State failed to place a team in the Top 50 overall, dropping them down to 5th in the School of the Year rankings.

“Our overarching goal is to win School of the Year, and we are hungrier than ever for it. We feel as if we need redemption from the past few years, being so close to that number one spot. Our plan is to be more consistent, as last year we struggled with that. We would have a super high finish in one tournament, and then low at the next. We also plan to perform with more consistency at the double points events. Those are crucial in the School of the Year race, and last year we did not take full advantage of those tournaments.”

Murray State is motivated entering the new season to make a statement near the top of the standings.  This will be a team to keep an eye on as a real contender to finish the season ranked number one if they can continue to build on their past history. 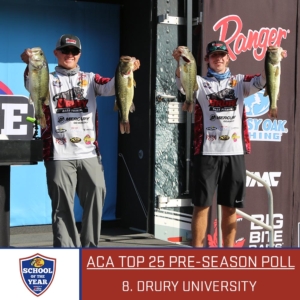 “Drury University is very honored to be selected by our peers as one of the Top 10 collegiate bass fishing programs in the pre-season rankings,” said Rick Emmitt, Head Coach of the Drury University Bass Fishing Team.  “Our anglers have worked very hard to achieve the level of success that we have accomplished, and we look forward to continuing to grow our program.”

Drury University had a phenomenal 2020-21 campaign that included a win at the AFTCO Collegiate Bass Open, another team in the Top 5 at the same event, a major National Championship victory, and a Top 5 finish at the 2021 Pickwick Slam.

The 2020-21 season marked the first time the ACA offered automatic qualification into its year-end Championship via top finishes at regular-season events.  Drury qualified a total of three teams via the Top 5 finishes qualification criteria.  Combined with the four spots earned by being in the Top 25 for the School of the Year race, Drury qualified to send a total of seven teams to the Championship.

Drury put together one of the most historic seasons in the team’s brief history and is looking to continue that success this year.  If the team can continue to finish events in the Top 10 and avoid bombing one or two events along the way, they will contend this season for the School of the Year title.

“Our goal for the upcoming season is to repeat as a National Championship winner in one of the 3 collegiate circuits and to finish in the Top 5 in the School of the Year rankings.  We are going to fish as many events as our budget will allow,” added Emmitt.  “We have nine new recruits with diverse experience plus eight returning anglers, so we will be taking more teams to events than in the past.  We are very excited about the growth of Drury Bass Fishing and look forward to continued success.”

There is no doubt that Drury University has the talent to push for the number one ranking in the School of the Year race.  Can the team build on its success from 2021 and capitalize on points earning opportunities?  Only time will tell as the 2021-22 season moves along if this will be their year.

Bryan College is a true wild card this season.  The team could just as easily win the title, as it might even slip out of the Top 20 in the rankings come season’s end.  Several of the team’s household names have graduated or ran out of eligibility, leaving the younger anglers behind to cut their teeth and uphold the Bryan College standard.  If those young anglers mature quickly, Bryan College once again will be in the race for the title.

We will definitely be keeping an eye on this former School of the Year winner as the season progresses.

From a team that’s possibly on the downward trend to one that is most definitely on the rise, Blue Mountain College lands in the number 10 spot based on the votes received in the ACA Top 25 Pre-Season poll.  Over the course of the last three seasons, Blue Mountain College has finished in the Top 10 of the final standings each time, including a team-best 5th in 2019.

Blue Mountain is a team that has proven they can refill the cupboard and keep quality anglers on the roster year after year.  Head Coach Shane Cox, along with the help of his son Ty and a few other team members, put the Toppers Bass Team on the map in 2018 with a 34th place finish in the School of the Year standings.  Fast forward to now, and Blue Mountain College is as successful as ever entering the 2021-22 season and they’ve been recruiting well this offseason.

Blue Mountain College is without a doubt a team to watch for this season.  The ACA will be making a stop in the team’s home state of Mississippi, as the second to last event of the season will be contested at Barnett Reservoir in early April of 2022.  Pair that event with the Championship returning to Pickwick, and Blue Mountain College could be primed for the best season in school history.