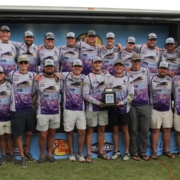 SAN ANTONIO, TX (May 31, 2022) – With the conclusion of the 2022 BoatUS Collegiate Bass Fishing Championship presented by Bass Pro Shops last week, the 2021-22 season of the Bass Pro Shops Collegiate Bass Fishing Series is now complete.  Point totals have also been finalized in the race for Bass Pro Shops School of the Year presented by Abu Garcia.  College fishing’s only all-encompassing national rankings system, this year-long race to be ranked in the national standings started in June of 2021 and came to an end last week in Florence, AL.  The University of Montevallo finished the season in the top-ranked spot in the nation for the second consecutive year with a season total of 19,275 points.  Finishing second in the nation was Auburn University, and two-time School of the Year winner McKendree University takes third with 16,155 points.

For the third time in the history of the Bass Pro Shops School of the Year presented by Abu Garcia, a school has claimed the title in back-to-back seasons.  Coming off of the school’s first title during the 2020-21 season, the University of Montevallo has now finished the season ranked number one in consecutive seasons.    The University of North Alabama and McKendree University also have won the title twice.

Montevallo and Auburn dueled it out near the top of the standings for most of the year.  After the dust settled and the scales closed in Florence, AL at the ACA Championship event, Montevallo finished the year almost 1,200 points clear of second-ranked Auburn.  Montevallo sealed the deal on its second-straight title with two Top 20 finishes at Pickwick Lake.  Easton Fothergill and Nick Dumke finished in 10th with a two-day total of 33.38 pounds, and fellow teammates Grayson Morris and Cade Holcomb took 19th place out of close to 200 boats.  The two Top 20 finishes netted Montevallo 2,460 points and extended their season total to 19,275.

Finishing the season ranked second in the nation is Auburn University.  Auburn finishes the season with 18,080 points, close to 2,000 points ahead of the next closest team.  This second-place finish marks Auburn’s best season ever as it pertains to the Bass Pro Shops School of the Year presented by Abu Garcia.

At the 2022 BoatUS Collegiate Bass Fishing Championship presented by Bass Pro Shops on Pickwick Lake, Auburn did manage to close the gap on top-ranked Montevallo ever so slightly.  Auburn earned 2,820 points compared to Montevallo’s 2,460.

Here is a quick look at Auburn’s two highest-finishing teams at the 2022 ACA Championship:

See the complete final rankings for the 2021-22 season.

The 2021-22 Bass Pro Shops School of the Year presented by Abu Garcia was a thrilling race to see who would finish the year ranked number one!  A total of 211 schools/universities competed over the course of the last 12 months in a total of more than 60 collegiate bass fishing events.  Across those numerous college events, the Association of Collegiate Anglers awarded a total of 643,580 points.

A new season is set to begin on June 1, 2022 with several points earning events scheduled to take place during the month of June.  View the latest schedule for the 2022-23 School of the Year points qualifying events here.   The list will be updated once more schedules are announced throughout the season as teams once again vie for the coveted top spot, as well as being ranked/recognized as one of the Top 25 schools in the nation.

View the complete rules and program details for 2022-23.

BeatDown Outdoors Partners with Association of Collegiate Anglers to Support...
Scroll to top