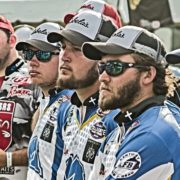 Cabela’s has long been a supporter of college fishing.  Last spring, Cabela’s once again increased its commitment to collegiate anglers with a new discount purchase program as well as an angler contingency program – Team Cabela’s.   This contingency program was first seen in action at the 2017 BoatUS Collegiate Bass Fishing Championship presented by Cabela’s. In 2018, the discount and contingency programs have been active throughout the year with numerous college anglers taking advantage of the program to shop at Cabela’s stores as well as be rewarded for top finishes.

“Team Cabela’s offers the collegiate anglers the opportunity to start looking towards the next step in their fishing careers,” said Lara Herboldsheimer, Brand Partnership Program Manager for Cabela’s.  “By making some noise on their social channels and fishing well, they have the opportunity to become a part of the Team Cabela’s roster representing the brand and the lifestyle.”

To further recognize Team Cabela’s anglers who have finished big at the events so far this season, Cabela’s and the ACA would like to give a shout out of congratulations!  Top qualifying finishers include:

Received the Top 10 gear package consisting of a Cabela’s Rod and Cabela’s PFD.

Received the Top 10 gear package consisting of a Cabela’s Rod and Cabela’s PFD.

“This program is another in a long line of programs to support collegiate fishing.  The overall contingency program was well received by the anglers as they worked to become a part of Team Cabela’s both at this event and others in the future.  Who knows, we may even find the next Cabela’s Ambassador out of this program!” said Wade Middleton, Director of the ACA and President of CarecoTV.

The Cabela’s Angler Contingency Program will also be active at the 2018 BoatUS Collegiate Bass Fishing Championship in Florence, AL and Pickwick Lake in May, where anglers will also receive a Cabela’s hat to wear during the week-long event.  For the Championship, 50 teams (100 anglers) will have the chance to win one of three Top Three gear packages – as well as other prizes for finishing in the Top 10, or Top 20. Keep an eye on #TeamCabelas for more wins!

Bethel Continues to Dominate the Cabela’s School of the Year presented by...
Scroll to top