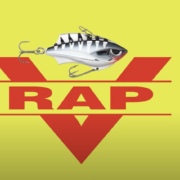 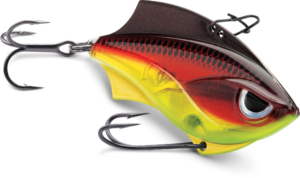 For whatever you fish for…

There’s a new lure that will catch them all – bass, pike, walleye, panfish, stripers – and much more.

Introducing the new Rap-V™ Blade. The “V” stands for maximum versatility. And it’s the most versatile fishing lure ever created by Rapala®. The multitool of fishing lures.

The new Rap-V Blade is the perfect balance of metal, plastic and Rapala expertise. This extremely versatile bait produces instant vibration on the lift or retrieve. It can be worked at any depth, from the shallows to deep water, with a wide range of techniques.

“The Rap-V offers maximum versatility with a capital V,” said Mark Fisher, lure designer for Rapala USA. “Whether you’ve been fishing for 40 years or you are new to fishing, you will catch fish with this lure. It’s so versatile, you can use it in any conditions, anywhere you fish, to catch just about any type of fish.”

Designed by the engineers at Rapala, the new Rap-V Blade is a hybrid lure that combines the best of a lipless crank bait with a blade bait. Available in one size at its introduction, size No. 6 (2-1/2 in. long), weighing a ½ oz., the new lure breaks the mold of traditional Rapala lures.

Anglers will first notice the eye of the new Rap-V. It’s huge. And it’s angry. The furrow is angled to give the eye a more aggressive look to trigger aggressive bites.

“Many of our Rapala fishing pro team members believe that predator fish target the eye of its prey,” Fisher said. “That’s why we intentionally made the eye larger to be more aggressive.”

The extra-wide metal dorsal (top) fin of the Rap-V Blade features two line-tie positions. When anglers tie their line to the front tie hole, the lure will provide a slower, lazy fall action. If they tie their line to the rear hole position, they’ll achieve a faster fall, head-down action. When combined with Rapala’s distinctive loud BB rattle system, the vibration and action of the lure is undeniable.

But that’s not all. The Rap-V is built with super sharp VMC® black nickel round bend hooks – a No. 4 double belly hook and a No. 6 rear hook. And, it’s available in 16 tantalizing color patterns to meet the needs of anglers fishing in clear or darker waters.

“This a lure you can fish all day and have fun with,” Fisher added. “Spring, summer, fall and yes…you can even use it in the winter to jig for fish through the ice. It’s that’s versatile.”

The new Rap-V Blade is available at rapala.com and leading fishing tackle retailers throughout the U.S. and Canada.

Rapala® was unofficially founded in 1936 when Lauri Rapala invented the Rapala fishing lure. Rapala has grown from humble beginnings to become a market leader in the fishing tackle industry. The brand’s functionality and high quality are known by fishermen worldwide. Rapala maintains strict standards of craftsmanship while delivering its fishing products to anglers in more than 130 countries. Visit www.rapala.com.