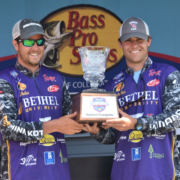 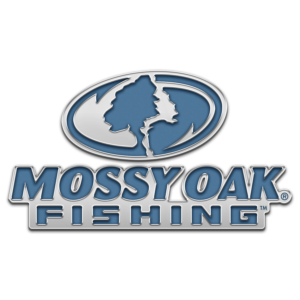 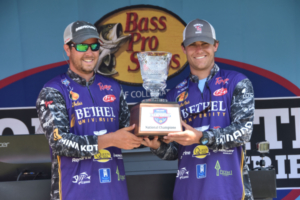 The championship tournament, presented by Bass Pro Shops and hosted on Pickwick and Wilson Lakes out of O’Neal Harbor and McFarland Park, fielded 400 anglers in a two-day test of fishing on the Tennessee River impoundments. Floyd and McNeil brought in a five-fish limit on day one that weighed 22.85 pounds and was good for the lead, then boated its near twin the second day with a five-fish haul of 22.80, also the heaviest bag of the second day as well as the second heaviest of the tournament, eclipsed only by their own fish from day one. They outdistanced second place by 7.32 pounds in a field that was otherwise separated by much narrower margins. First prize was $5,000.

“Having won last year and carrying that target on our backs made it hard coming in, but it wasn’t a bad target to have,” Floyd said. “God’s really blessed us. This is a dream come true, to win competing against this caliber of competition.”

The two targeted different locations on each day and caught their fish on a little bit of everything.

“We really keyed in on the river drops and on the subtle changes in the bottom from hard to soft,” McNeil said. “Once we found the fish, they hit just about anything we put in front of them.”

They focused their attention on key deep-water areas in the 15- to 25-foot range, then settled on one for their first day’s work and one other on day two. The tournament blasted off each day at 6 a.m. and began weighing in at 2 p.m. but, on each day, Floyd and McNeil had the fish they’d weigh in their live well before 10 a.m.

This is the third national championship for Bethel University. Both Floyd and McNeil are juniors, so a third attempt at the top mark for the two business management majors is not out of the question.

Both were tremendously appreciative of the opportunities collegiate fishing affords.

“High school fishing leads into college, and it’s just an awesome opportunity all the way around,” Floyd said.

“What could be better than to go to school and fish on scholarship?” McNeil said. “It doesn’t get any better than that.”

Finishing in second place were Landon Smith and Jordan Thompson from Calhoun Community College, in nearby Decatur, Ala. They credited their haul to finding fish where no one else was looking. With big bass generally working deep ledges at this time of year, a 200-boat tournament of entrants from all over the country is certain to identify and fish the same schools over and over. Smith and Thompson found fish in the quiet and were able to relax themselves, which they credited with both a quality finish and a good time to boot.

In third, Gilliam Tharpe and Jacob Moore, of North Carolina State University, worked spinnerbaits and crank baits through submerged grass beds to haul in a two-day total of 35.77 pounds.

The Blue Mountain College team of Ty Cox and Chandler Boman landed a fourth-place finish in the national championship with a two-day total of 35.13 pounds.

“Coming into the practice days, we felt great about it,” Cox said. “We found a lot of schools. Then we went back on day one to where we’d found the best school and they were gone. We spent the next two hours graphing and working our electronics to find fish worthy of a cast before ever wetting a line. It was well worth the wait. When we finally found them, we caught 18 pounds and went back the final day and caught 16 pounds. We did well, it just wasn’t quite enough.”

“It’s an honor to play a role in this tremendous program for young anglers at the collegiate level,” said Ben Maki, Senior Vice President, Chief Marketing Officer of Mossy Oak. “It seems as if the competition gets stronger year-after-year and we’re proud of all the competitors pursuing their outdoors passion and learning through the experience.”

To see the full field of finishers or learn more about the series, visit www.collegiatebasschampionship.com.

To learn more about Mossy Oak, visit https://www.mossyoak.com and to enjoy some of the latest outdoor and hunting-related content, download Mossy Oak GO at www.mossyoak.com/MOGO.