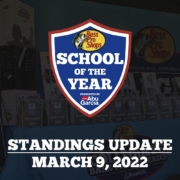 2nd ranked Auburn narrows the gap between 1st, and Carson-Newman slides up into 3rd in the national rankings

The most recent update to the standings is highlighted by points updates from two MLF regional events.  Both the Western and Southeastern conferences were in action last weekend, with 1,000 points on the line for the winner at each event.  Here is a look at several of the major movers inside of the Top 10 following those two events:

A little further down in the Top 25, numerous other teams made major moves, some achieving their highest rankings of the season.  Bryan College is now ranked 12th, up three spots from the previous rankings.  Both Georgia College and Bethel University bump up two spots to be ranked 16th and 17th respectively.  Florida Gateway College and Catawba Valley Community College make the largest leaps in this week’s standings update.  Catawba Valley CC climbs four spots up to 21st, and Florida Gateway College checks in at 25th, five spots better than their previous ranking.  Last weekend’s MLF Southeastern Regional event at Lake Guntersville is the final regional scheduled for the Southeastern conference in this cycle for the Bass Pro Shops School of the Year presented by Abu Garcia.

The top of the standings remains the main focus this season as the same five to six teams continue to jockey back and forth in their quest to be the best collegiate bass fishing team in the nation.  Top-ranked University of Montevallo earned a total of 860 points from a Top 15 finish by Cal Culpepper and Easton Fothergill at the MLF Southeastern Regional.  Though Auburn was able to gain 60 points on Montevallo, the 2021 title winners maintain their position atop the standings with a season points total of 11,085, 695 points in front of Auburn.

With just over two months remaining in the race, the stakes will only continue to rise as each event remaining on the schedule is contested.  Of the teams currently ranked in the Top 10, seven have never won the Bass Pro Shops School of the Year presented by Abu Garcia.  Those teams are hungry to claim the most prestigious title in collegiate bass fishing and will be doing everything in their power to make a dream become reality.

Following the postponement of the 2021 Bass Pro Shops Big Bass Bash presented by Berkley, here is a look at upcoming points qualifying events: