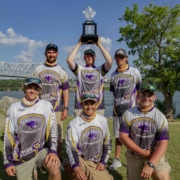 “I was a nervous wreck all day.  It was until the very last wire when we realized that the pressure went away and that overwhelming feeling just came over me,” said Jon Rinderer, Head Bass Fishing Coach at McKendree University. The Bearcats claim the title by beating out their nearest competitor by more than 800 points.  It took a solid two-day performance, and a unified team 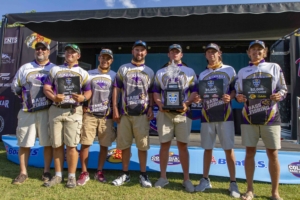 approach to pull off this monumental accomplishment.  “Feels pretty good, to be honest.  We’ve done this all year, just been consistent.  That’s how it happened, we did this together,” noted Bearcat angler Ethan Jones.

When a team battles all year long to win a coveted title such as the School of the Year, they have to overcome obstacles and hold off challenging teams.  “Going in with a big lead is always tough because it’s easy to blow it especially with this Championship.  There are some guys here that are good on the Tennessee River,” said Blake Jackson.  When you look back and analyze the race for a title, there is always a defining moment for the eventual winner.  For McKendree University, that moment came at roughly 10:00 AM on day two within sight of takeoff.

Trevor McKinney and Blake Jackson pulled up to an offshore spot near the launch site around mid-morning.  As I sat under the tent working on the blog, I was able to watch them cast crankbaits and jigs up current looking for that next bite.  Within minutes of the pair dropping their trolling motor in the water, their Head Coach walked up and took a seat as well.  Knowing what was at stake on the final day of the BoatUS Collegiate Bass Fishing Championship presented by Bass Pro Shops, Rinderer was extremely anxious about what was in store over the next few hours.  “I take a light blood pressure pill every day, and it didn’t get the job done today.  My blood pressure was through the roof,” he said.

Within the first 30 minutes that McKinney and Jackson worked this spot, they probably caught around six to eight bass.  One of those fish was a keeper that allowed them to cull up ever so slightly.  However, they were still in search of a kicker fish that could possibly clinch the School of the Year title.  Well, that fish decided to bite, and everyone was standing nearby to witness the moment they landed this fish.  One of our camera crews was even in the boat as the fish was landed. 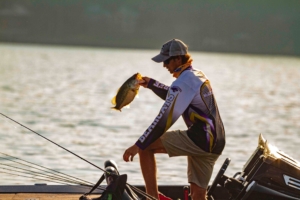 Director of the ACA, Wade Middleton, was the driver of the camera boat following the team.  He estimated the bass to weigh roughly five pounds.  At that time he presented the question, ‘Did we just witness the moment that McKendree clinched the School of the Year?’  For the anglers that landed the fish, they were thinking the same thing.  “It was awesome because they were screaming almost as loud as we were when we caught the six pounder that really propelled us into our big bad today.  So it was awesome to know they were right there watching.  I’m sure coach really liked it because he knew we had a reasonable bag, and probably had a good idea that we were going to win School of the Year,” said McKinney.

That fish turned out to be more than enough for McKendree to claim the title.  Trevor McKinney and 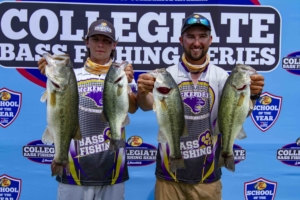 Blake Jackson weighed in 19.31 pounds on day two to finish in fifth place overall with a total of 34.79 pounds.  Jacob Louis and Nathan Doty were McKendree’s second highest finishing team, earning points for their 11th place finish.  The Bearcats ended up beating out second place Bethel University by more than 800 points to win the Bass Pro Shops School of the Year presented by Abu Garcia.  This is the first SOY title for McKendree, and the anglers are overwhelmed by the magnitude of this moment.  “Being this my senior year, it’s really special to me that we could get it done this year.  Knowing that I’m not going to be able to do it next year, getting it done this year is going to mean a lot,” added Jacob Louis.

It has been noted over and over again that this race is a true challenge, but with such a daunting task comes a great deal of notoriety and attention for the victor.  “This program is so widely looked at and acknowledged for being the premier accomplishment in college fishing.  It’s incredible for our program.  The attention that it brings to our university is amazing.  We couldn’t afford any attention that we get through this program.  It’s phenomenal,” noted Rinderer.  Later this week, we will have more coverage of McKendree University as they will join us for this week’s episode of the #WeAreCollegiateBass Podcast to further discuss their monumental victory.

Here is a complete look at the top 25 in the 2018-19 Bass Pro Shops School of the Year presented by Abu Garcia: