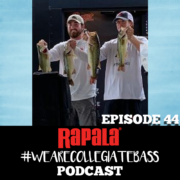 On this episode of the Rapala #WeAreCollegiateBass Podcast we talk to Fletcher Nutt and Dustin Reid from Arkansas Tech University. They won a recent FLW College Fishing event on the Arkansas River. The event took place out of Little Rock, and anglers took to the Arkansas River to see who could catch the five best bass. Nutt and Reid weighed in five fish for 15 pounds 2 ounces. That total bested second place by roughly two and a half pounds. While we have these two Arkansas Tech University anglers on the phone, we take a minute to talk with them about the upcoming AFTCO Collegiate Bass Open. The event will be held on Lake Dardanelle from October 26-27, 2019. ATU is located in Russellville, AR which is near the host site at Lake Dardanelle. Tune in to hear what these anglers have to say on the latest episode!

An Inside Look at Kentucky Lake