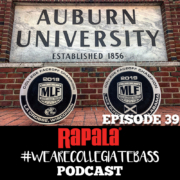 This past Monday, Major League Fishing held the inaugural College Faceoff at Redcrest. The event took place in Wisconsin with dozens of college anglers traveling from near and far to participate. Any fish weighing in at one pound or heavier counted, and the school with the highest combined weight from their top two teams would be crowned the victor. Auburn University from the state of Alabama emerged as victors once the weights were totaled. On today’s show, we will talk with the six team members that contributed to this victory. Tune in to hear what they have to say!