University of North Alabama in 2nd and

Bethel University maintains its lead while University of North Alabama moves into second in the Cabela’s School of Year presented by Abu Garcia standings, and moving into the top three is the fishing powerhouse of Auburn University. With two FLW events and an ACA event in the last ten days, Bethel University has had an impressive run – even taking first overall at the Cabela’s Collegiate Big Bass Bash presented by Berkley this past weekend – solidifying their number 1 ranking.

Bethel had to overcome being penalized during the official practice period of the Cabela’s Collegiate Big Bass Bash to maintain their lead.   The penalty. imposed by the Association of Collegiate Anglers, was due to a violation of a rule where a Bethel team coach was on the water testing a boat during practice.  This infraction of the rules and subsequent penalty resulted in the Bethel anglers in question not being allowed to fish the event at all, as well as the entire Bethel team sitting out the second day of competition, thus allowing them only one day to compete. 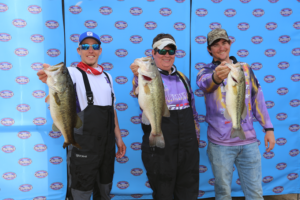 After finishing fourth in last year’s rankings, Bethel changed their strategy in an effort to win the title of 2018 Cabela’s School of the Year. The Bethel Bass team has competed in eleven qualifying events to-date, giving them a solid lead over past Cabela’s School of the Year champions, University of North Alabama. Not only has Bethel been fishing every event possible, it is noteworthy to add that they have also been fishing well. They have finished in the Top 5 in nine of the eleven events fished this season. 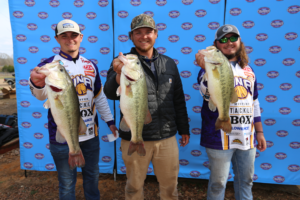 Currently sitting in second is two-time Cabela’s School of the Year champions, University of North Alabama. Since the new year rang in, UNA has fished seven events with four Top 5 finishes. UNA has hit the ground running in 2018 and shows no signs of slowing down. With 603 points separating them from Bethel University, UNA will be looking to collect all the points possible between now and May, including the season ending BoatUS Collegiate Bass Fishing Championship presented by Cabela’s on their home lake.   UNA is one of the premier college fishing programs in the nation and their on the water results are showing that.

Making a return to the top three is Auburn University, who has steadily been climbing the rankings in search of their first Cabela’s School of the Year 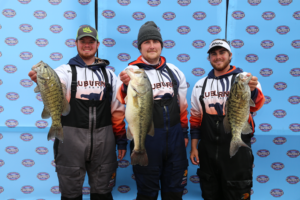 title this season. Auburn finished 10th last year in the rankings and has been on the prowl for the number one spot since the season began. Auburn has also changed their strategy this season, fishing every event possible to earn valuable points towards the standings.  Auburn has also done well at the BoatUS Collegiate Bass Fishing Championships, so it’s to be expected for them finish in the Top 10.

While the race for Cabela’s School of the Year is in high-gear, it’s shaping up to be another interesting year.  With several major events on the horizon in the next 60 days, teams will have a huge opportunity to move into contention for the 2018 title.