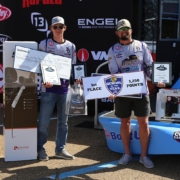 SAN ANTONIO, TX (October 17, 2022) – Collegiate bass fishing is one of the fastest growing segments of competitive bass fishing in the country.  Thousands of anglers representing hundreds of teams ranging from California, up to Michigan, and all the way down to Florida compete in close to 100 college fishing events each year.

The sport of collegiate bass fishing provides these great young anglers with a platform to compete, fellowship with other anglers, and forge a path to pursue a career in the fishing industry.  In an effort to shed more light on collegiate bass fishing and introduce the sport to a national audience, the nationally televised program Americana Outdoors presented by Garmin produced a full episode highlighting the Bass Pro Shops Collegiate Bass Fishing Series.

The Association of Collegiate Anglers was formed in 2005 to create an organization dedicated to the building and growth of collegiate bass fishing.  With that came the formation of the Bass Pro Shops Collegiate Bass Fishing Series and the first ever National Championship event, the BoatUS Collegiate Bass Fishing Championship presented by Bass Pro Shops.  That very first event started with 47 boats representing schools from mostly the southern part of the country.  Today, collegiate bass fishing has grown into an international sport with hundreds of teams from all across the country, as well as Canada, boasting organized bass fishing clubs and teams comprised of over 100 members in some cases.

“When we first set out to create a nationally televised collegiate bass fishing tournament series nearly 17 years ago, we did so with hopes of providing a thriving platform for young anglers to compete and grow their careers,” said Wade Middleton, CarecoTV President and Director of the Association of Collegiate Anglers.  “You look at it now today, and the growth of the sport is unbelievable.  This fall, we’ve hosted two events.  One fielded nearly 520 anglers on Kentucky Lake, and the other saw 218 boats fish out on Lake Dardanelle.  College fishing is a growing platform and we’re excited to be able to share this story with a national TV audience that reaches millions of households.”

The Bass Pro Shops Collegiate Bass Fishing Series is the premiere major collegiate tournament trail in the country.  Hosting no-entry-fee events, each tournament boasts a loaded field competing for prize payouts valued at over $20,000 in prizes and contingencies.    The nationally televised episode will highlight the 2021-22 season, which includes tournament stops at these major fisheries:

“Collegiate bass fishing is an awesome platform that provides anglers with endless opportunities both on the water and inside the fishing industry,” added Kyle Curry, ACA Managing Director and Senior Editor for CarecoTV.  “As a former college angler myself, and editor of this particular episode, I am excited to share the great stories and programs tied to the 2021-22 season with a national audience through Americana Outdoors presented by Garmin.”