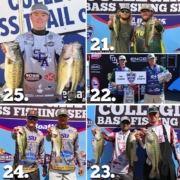 San Antonio, TX (7/18/2022) – The Association of Collegiate Anglers, which operates the Bass Pro Shops School of the Year presented by Abu Garcia, is excited to present the annual pre-season rankings for college bass fishing.  According to a voting poll of top coaches, schools, media personnel, and fishing industry personalities with experience in college fishing, the ACA will be highlighting the Top 25 teams in this prestigious poll.

This poll is a one of a kind poll, similar to rankings in other college sports, that will help kick off the season-long race for the prestigious School of the Year title.   Each day this week, the ACA will unveil five ranking spots in the pre-season poll, culminating with the Top 5 being announced on Friday.  Following the conclusion of this feature, the first official standings in the 2022-23 race for the Bass Pro Shops School of the Year presented by Abu Garcia will be released in early August.  Today’s article will show teams that were selected 21st-25th in the pre-season rankings. 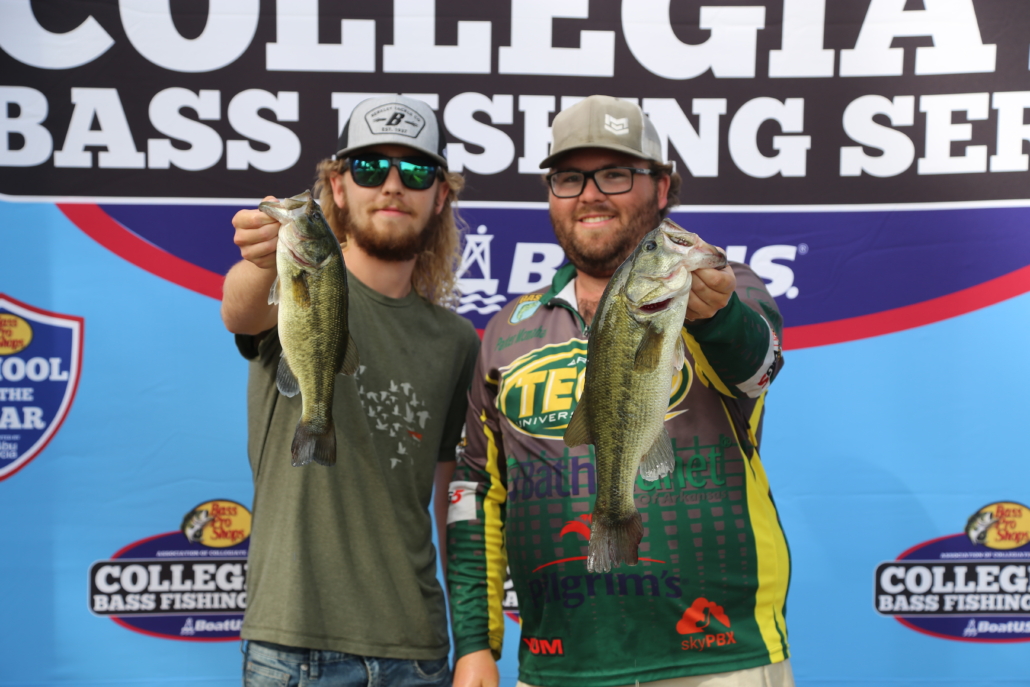 Arkansas Tech is a program with a storied past in the sport of collegiate bass fishing.  The Arkansas Tech University Bass Fishing Team won the first-ever ACA School of the Year title back in 2012.  Since then, Arkansas Tech has maintained a high standard of competition on a national level.  The team from Russellville, AR finished the 2021-22 season in 25th, and has been picked 21st overall entering the upcoming race.

Just one year ago, Arkansas Tech was picked 21st entering the 2021-22 season.  This marks back-to-back years in which Arkansas Tech has been selected as the 21st best bass fishing team in the nation going into a new season.

The Association of Collegiate Anglers will be near the campus of Arkansas Tech in Russellville, AR, at Lake Dardanelle, for its second stop of the season on the Bass Pro Shops Collegiate Bass Fishing Series.  The AFTCO Collegiate Bass Open will be contested on October 8-9, 2022.  This event will boast a total payout of over $30,000 in prizes and contingencies, as well as double points to count towards the Bass Pro Shops School of the Year presented by Abu Garcia.

The 2022 AFTCO Collegiate Bass Open will provide Arkansas Tech University the opportunity to kick off the new season with a strong start.  Home lake knowledge, along with the chance to send a good number of teams to compete, will play into Arkansas Tech’s advantage out on Lake Dardanelle as they compete for valuable points.  No stranger to the Top 25 in the National Rankings, look for Arkansas Tech to put together another strong season in the 2022-23 cycle.

Checking in at 22nd overall in the nation for the pre-season poll in the Bass Pro Shops School of the Year presented by Abu Garcia is Georgia College.  Coming off of a 16th place finish in the 2021-22 season, Georgia College is proud to be inside of the Top 25 entering the new year.

“It means the world to us to be ranked in the Top 25, as we are a team that has some very dedicated and goal driven members,” said Josh Finnerty, President of the Georgia College Bass Fishing Team.  “It feels great to be up there with other teams as we are a student run program, so everything is run by the team members, which is a huge accomplishment in our book.” 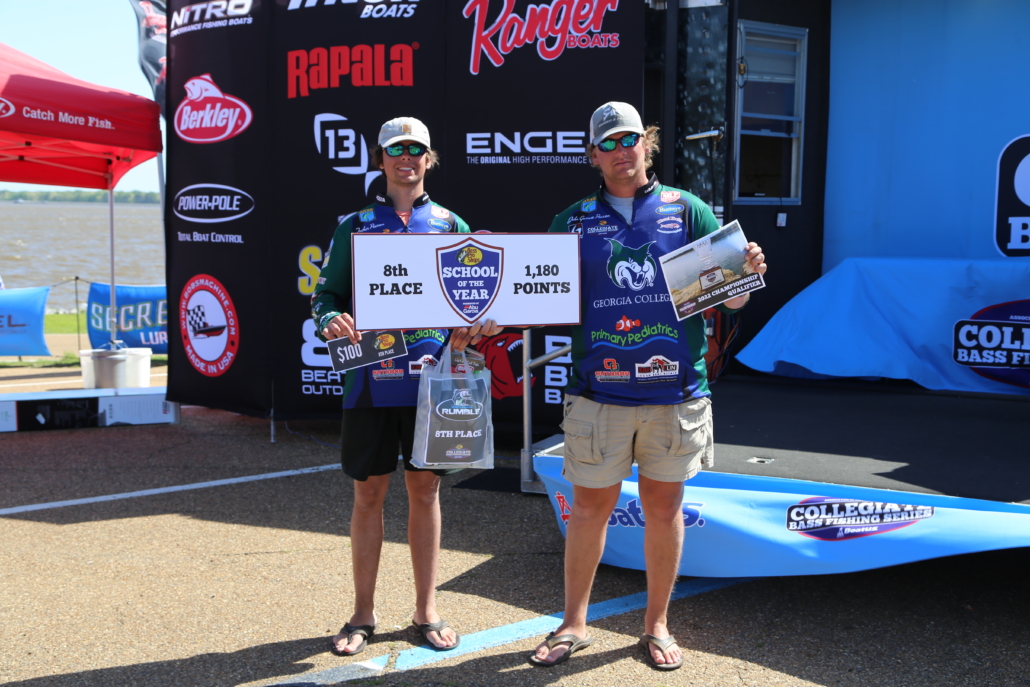 Georgia College put together a great run throughout the 2022-23 season.  Competing in all three Association of Collegiate Anglers double points events throughout the 2021-22 season, Georgia College earned plenty of valuable points along the way.  The team earned over 2,000 points at each of the two ACA regular season events, the AFTCO Collegiate Bass Open, and Barnett Reservoir Rumble.  Team members John Pearson and Tucker Pearson notched the team’s highest finish of the year at an ACA ran event by taking 8th place at the Barnett Reservoir Rumble.

Entering the 2022-23 season, Georgia College is looking to build on the momentum the team created last year.  “One of our main goals for the upcoming season is to try to get into the Top 10 in points. Our team is very dedicated, and we all have the same mindset on the goals we’d like to achieve,” added Finnerty.  With several of its top contributors returning again this year,  keep an eye on Georgia College as they embark on the quest to achieve their goal of finishing the upcoming season in the Top 10.

Following a 23rd place finish in the 2021-22 Bass Pro Shops School of the Year presented by Abu Garcia, the University of Alabama finds itself in the 23rd spot to begin the 2022-23 race. 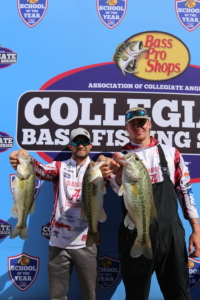 by Abu Garcia.  Claiming the title back in 2016, the University of Alabama has sustained a high standard of success over the past seven seasons.  The team from Tuscaloosa, AL has finished inside of the Top 30 in the nation in five of the last seven seasons.

Alabama is a hot bed for bass fishing across all levels of the sport.  Whether it be out on the professional circuits, weekend derbies, college, and even high school events, competitive bass fishing is a sport that thrives 12 months out of the year in Alabama.  Because of the abundant opportunities to fish and top-tier fisheries spread across the state, Alabama produces some of the best anglers in all of competitive bass fishing.

The diversity of the fisheries in Alabama play a key role in the University of Alabama’s success nationwide on the college trail.  These anglers are familiar with fishing current, muddy and clear water, deep and shallow, along with a lot of other specialized techniques.

The Association of Collegiate Anglers will make a stop in Alabama on April 15-16, 2023 at Pickwick Lake in Florence, AL for the 2023 Pickwick Slam.  If the anglers from Tuscaloosa can put together a strong start to the season in the Bass Pro Shops School of the Year presented by Abu Garcia, the 2023 Pickwick Slam could be a deciding event that determines whether or not the University of Alabama can be a contender to finish the season ranked number one. 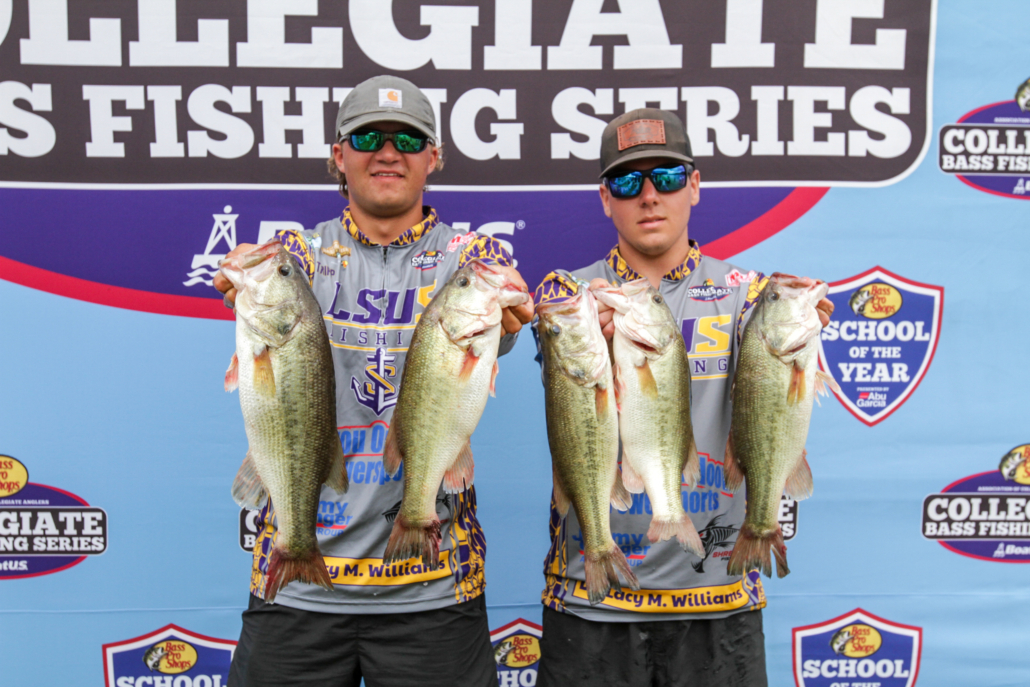 Coming off of a 20th place finish in the 2021-22 Bass Pro Shops School of the Year presented by Abu Garcia, LSU-Shreveport has been picked by anglers, coaches, media members, and industry representatives as the 24th best team entering the upcoming season.

LSU-Shreveport competed in all three Bass Pro Shops Collegiate Bass Fishing Series events throughout the 2021-22 season.  The Louisiana anglers proved to be consistent as they traveled across the country competing at numerous diverse fisheries.  From finicky fall fishing river conditions at Lake Dardanelle, to targeting shallow springtime bass at Barnett Reservoir, and scanning the famed ledges of Pickwick Lake, LSU-Shreveport picked up valuable experience that will help them going forward as they look to achieve their goals this upcoming season.

“We want to create an opportunity for young adults in our area and across the country to get a great education and succeed on the water while doing so,” added Thompson.

Head Coach Charles Thompson enters the upcoming season with a great deal of optimism for his program.  The team has added numerous new team members, including highly regarded high school recruits, that will help to bolster the current roster.  As the team continues to grow and evolve, competing in more events across the country, look for LSUS to possibly put together one of the best seasons ever in program history during the 2022-23 race.

Stephen F. Austin State University is the first team to be voted into the Top 25 in the ACA pre-season poll that finished the 2021-22 season outside of the Top 25 in the Bass Pro Shops School of the Year presented by Abu Garcia.  Following a final 2021-22 ranking of 27th, SFA has been selected as the 25th best team in the nation.

Located in Nacogdoches, TX, Stephen F. Austin has a rich history as a powerhouse team in collegiate bass fishing.  Along with top past finishes at many national level collegiate events, numerous former team members have gone on to have a great deal of success in the professional ranks.

Stephen F. Austin did not receive points at any of the three major ACA double points events last season.  If SFA is able to capitalize on the double and triple points opportunities available at ACA events this upcoming season, look for them to surge up the standings and best their pre-season ranking of 25th with ease.