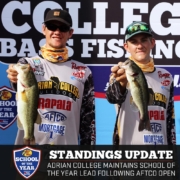 SAN ANTONIO, TX (October 13, 2021) – The first major Association of Collegiate Anglers double points event of the season, the AFTCO Collegiate Bass Open, has provided some major shake-ups to the standings in the Bass Pro Shops School of the Year presented by Abu Garcia.  51 different schools, including nine of the Top 10 ranked teams entering the AFTCO Open, competed in last weekend’s event. A total of 78,750 points were awarded, as teams strived to achieve their schools’ goal of being ranked in the Top 25 in the nation, as well as possibly making a run at the coveted School of the Year title.  Number one ranked Adrian College earned 1,510 points to extend its season total to 7,285.  McKendree University leap-frogged Auburn University with a dominant 2,350-point performance, bumping Auburn down to 3rd by a mere 125-point margin.

The AFTCO Collegiate Bass Open has always been one of the most pivotal events of the early season in collegiate bass fishing.  Being that it is the first double points event in the chase for Bass Pro Shops School of the Year presented by Abu Garcia, the tournament can set a school up for a season-long stay in the Top 10 and position them for a run at the title.  On-site in Russellville, AR, the tension and stress of the magnitude of this event was evident, as 216 total teams were on hand to claim their share of the points.

Here is a look at the top teams that best capitalized on the double points opportunity at Lake Dardanelle:

Double points events provide teams with the opportunity to make a massive move in the standings with two high finishes.  The most possible points a given school could have earned at the AFTCO Open was 2,490.  The University of Montevallo, winner of the School of the Year race last season, earned the most points of any school participating in the event with 2,380.  Team members Cole Dodson & Tyler Cain finished in 6th, and Hunter Odom & Brenton Godwin took home 8th place honors.  A total of nine teams earned over 2,000 points at the first ACA event of the season.

View the complete School of the Year rankings.

Of the teams ranked in the latest Top 25, 21 competed in the AFTCO Open.

Teams that failed to make the trip to Lake Dardanelle or did not put together two high finishes in the overall tournament standings, experienced a major fall in the national rankings.  Here are some of those notable movers downward in the rankings:

Numerous other major college events and school-run tournaments are scheduled to take place over the course of the next two months.  Follow this link to view the complete schedule for the 2021-22 Bass Pro Shops School of the Year presented by Abu Garcia.