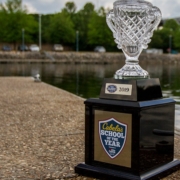 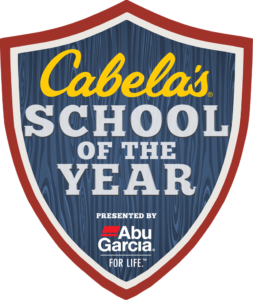 The goal of every college fishing program is to win the Cabela’s School of the Year title, there’s no doubt about it.  This is the mentality of just about every school that participates in college bass fishing.  Week in and week out, college anglers compete against each other on some of the best lakes in the country.  To perform well, and even win one of those events, is a great accomplishment.  Now take that type of success and duplicate it dozens of times throughout the season, and you are looking at the formula it takes to win the Cabela’s School of the Year presented by Abu Garcia title.

The one team that seems to have the best grasp on this formula so far is Adrian College. The Michigan anglers took hold of the top spot when the results were first released back in the summer, and they have yet to relinquish the number one place in the standings.  “Everybody on the team is extremely excited, but also humbled.  We have finally managed to maintain the lead, which really got myself and all of the guys wondering,” said Jack Hippe, a member of the Adrian College Bass Fishing team.

As we near the halfway point in the season, Adrian College has 2,900 total points in their chase for Cabela’s School of the Year presented by Abu Garcia.  At the AFTCO Collegiate Bass Open on Lake Dardanelle, the SOY leaders had two teams competing.  Of those two teams, only one placed inside the top 100 and thus earning points.  Jack Hippe and Griffin Fernandes finished with a two-day total of 22.70 lbs.  That was good enough for an 18th place finish and 415 points. 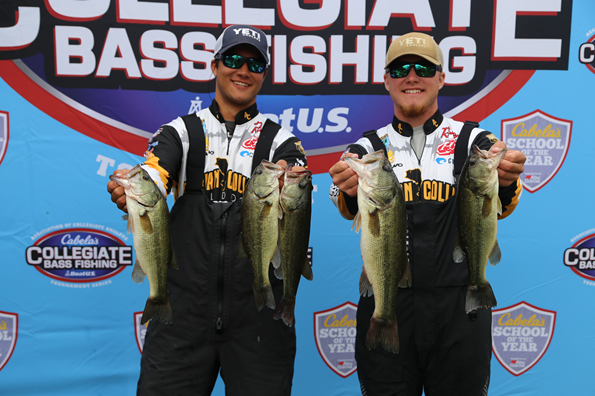 By having only one of their two teams finish inside the top 100, Adrian College could feel the effects of this missed opportunity later down the road this season.  “There is no doubt that not having a second team in the top 100 will absolutely hurt us by the end of the season.  So, we just do our best to make the best of it,” noted Seth Borton, Head Bass Fishing Coach at Adrian College.

Though we are halfway through the tournament calendar, the season is still young.  The spring will offer many more opportunities to earn points, with three ACA events remaining as well.  All of the teams will continue to push for the Cabela’s School of the Year title and try to keep their morale high as the year progresses.  “This is one of the best chances I think Adrian is ever going to get to win School of the Year, so we are through the roof just thinking about the potential outcome of this season,” added Hippe.

One team that took advantage of the double points opportunity last week at Lake Dardanelle was the McKendree University bass fishing program.  Pairing a top five finish with a 17th place finish, McKendree earned a total of 905 points.  This boosted them to the number two spot in the standings for Cabela’s School of the Year presented.  “With Dardanelle being a double points event, we definitely wanted to have a great showing.  We felt that if we could get a couple boats into the top twenty, we could move up the standings,” said Jon Rinderer, Bass Fishing Coach at McKendree University.

Moving from 5th to 2nd, McKendree University is currently ranked at the highest spot in program history.  “Cracking the top three and sitting in second place feels absolutely incredible!  Getting to the number two spot took consistent finishes at each event that we fished, and staying in this spot will take continued consistency,” added Rinderer.

Among the most recent contributors to this team’s success is Trevor McKinney.  McKinney, along with the help of his partner Ethan Jones, finished 4th overall at the AFTCO Collegiate Bass Open with 26.90 lbs.  The two weighed in a five fish limit of 16.48 lbs on the final day to make a climb up the leaderboard. 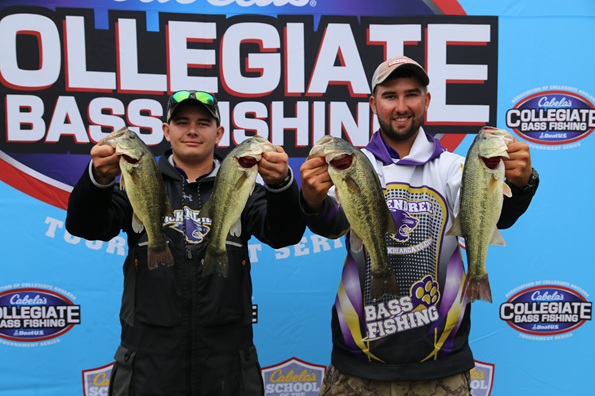 “This year, anyone on our team could catch a big sack of fish at any tournament.  I think this is one of the main reasons as to why we have been so successful up until this point.  It will be exciting to see how the rest of the season goes,” said McKinney.  The next ACA event on the schedule is the Texas Lunker Challenge presented by Mossy Oak Elements.  McKendree University confirms they plan on attending this event in early February.  There is a possibility that a good showing there could propel them into the overall number one spot.

As is the case with Adrian College, it sounds like a broken record, but for several consecutive updates in a row, Grand Valley State University remains in the top three.  This time they sit perched in the number three spot.  With 2,480 points, GVSU has had a very successful summer and fall season.  “We feel that we’ve accomplished our goals for the fall of this year.  We know that we may not have as many opportunities to compete over the next few months, and we wanted to accumulate as many points as possible before winter,” said Lucas Murphy. 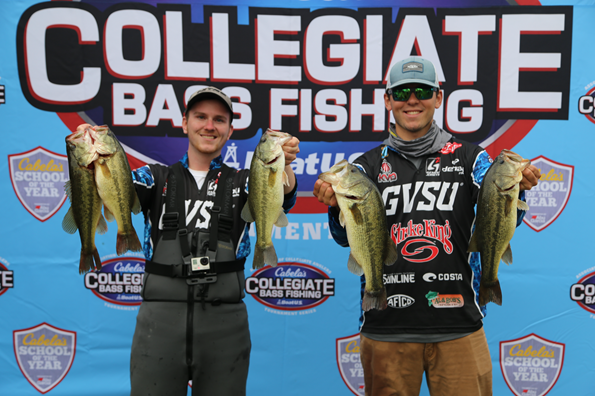 Lucas Murphy and Bill Mathews helped to cap off the strong fall season with a decent finish at the AFTCO Collegiate Bass Open.  They finished at 30th place and earned 355 points towards the Cabela’s School of the Year.  “Bill and I performed about how we expected.  With having no experience with Lake Dardanelle whatsoever, and after only making it down with four hours left of practice, we knew we were in for a challenge,” noted Murphy.

Grand Valley State University was only able to bring one team to Russellville, AR late last week.  So, the 355 points earned by Murphy and Mathews were the only points earned towards their Cabela’s School of the Year total.  In order to make a run at the title, it will be key for the club to get more teams involved.  “We look forward to building a stronger foundation as a club in the next couple months in hopes to have the resources necessary to continue competing for School of the Year,” said Murphy.

A look at the Cabela’s School of the Year presented by Abu Garcia Top 20:

For a complete look at the standings, follow this LINK.

The chase for the Cabela’s School of the Year presented by Abu Garcia is always very intriguing to monitor.  In a typical year there will be a lot of shifting towards the top of the leaderboard.  So far through the 2018-19 season this has yet to happen.  The top five at this point is separated by less than 900 points.  In an ACA event, that is a surmountable lead.  Continue to follow the Cabela’s Collegiate Bass Fishing Series as teams strive to claim the Cabela’s School of the Year title.

About the Association of Collegiate Anglers