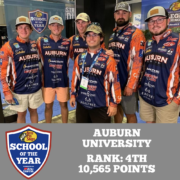 SAN ANTONIO, TX (5/19/2020) – “It means everything for our team to be in the Top 25,” said Will Phillips, member of the Auburn University Bass Team.  “We pride ourselves on continuing the Auburn tradition of competing at a high level. Being in the top 5 specifically allows us to have the mentality of shooting for SOY at the Championship.”

Entering the final event of the year, Auburn University is ranked 4th in the Bass Pro Shops School of the Year presented by Abu Garcia.  The team has earned a total of 10,565 points and is looking to finish the season with the highest rank in school history.  “My freshman year we actually led for part of the season and it came down to the National Championship to decide where we ended up,” recalled Logan Parks, a junior now at Auburn University.  “After having such a great season it was a little disappointing to end up in 4th that year. It means a lot to me to be sitting in 4th in School of the Year with a chance to improve.  As far as I know, 4th is the highest we’ve ever finished so it would mean a lot to break that record.”

Logan is indeed correct with that statement.  4th place is the highest Auburn has ever finished in the School of the Year Race.  That monumental season came in 2017, just one year after the team had completed its worst finish as a school, ending the year ranked 26th.

Auburn benefits from being located in a state with a diverse group of fisheries.  Alabama is known for its healthy river systems including both the Coosa and Tennessee rivers.  Then also add in the fact that Alabama has lakes that range from deep, clear reservoirs, to shallow, muddy bodies of water.  It is this diversity that makes anglers from the state of Alabama, including those at Auburn, to travel the country and have a great deal of success.

For the next event on the calendar from the Association of Collegiate Anglers, the BoatUS Collegiate Bass Fishing Championship presented by Bass Pro Shops, Auburn anglers will not have to travel far to have a shot at claiming a national championship.  The playing field will be Pickwick Lake, located in Florence, AL, just over 200 miles from the Auburn University campus.  The team has numerous anglers that are familiar with this Tennessee River fishery, and are very confident they can figure out a winning pattern, “I absolutely love this event, I look forward to it every season. One of my favorite things to do is catch them when they get offshore and that’s what it’ll be again this season,” Parks added.

Auburn anglers Mitchell Jennings and Cole Burdeshaw won the BoatUS Championship in 2016 with a winning weight of approximately 44 pounds.  This marks the only time Auburn University has won this particular event.

The Championship event at the end of the season will crown both a National Champion and School of the Year winner.  “We have an ‘if you’re not first you’re last mentality’  going into this tournament,” said Phillips.  “We have several seniors that want to go out in the best way. We are looking forward to giving it our all to win SOY and the Championship.”  Not only is this a special week for the seniors on the team, but Logan’s birthday also falls during the tournament dates.  He’s hoping for the best birthday present possible when the scales close on Championship day.  “My birthday is also during the event so I can think of no better present than to be able to bring home the title.”