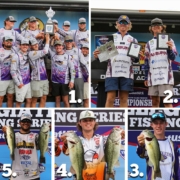 San Antonio, TX (7/23/2022) – The Association of Collegiate Anglers, which operates the Bass Pro Shops School of the Year program presented by Abu Garcia, is excited to showcase the pre-season rankings for college bass fishing, according to a voting poll of top coaches, schools, media personnel and fishing industry personalities with experience in college fishing.

This poll is a one of a kind poll, similar to rankings in other college sports, that will help kick off the season-long race for the prestigious School of the Year title.   Every day this week, the ACA will count down and showcase teams that made it into the Top 25.  Today’s article will show teams that were selected 1st to 5th in the pre-season rankings.

Coming off of back-to-back titles, the University of Montevallo is once again picked as the number one team entering the upcoming season of the Bass Pro Shops School of the Year presented by Abu Garcia.

Just over one month ago, Montevallo secured its second straight title at McFarland Park on the shores of Pickwick Lake in Florence, AL following the conclusion of the BoatUS Collegiate Bass Fishing Championship presented by Bass Pro Shops.

“Really wanted to come back.  We won this thing last year, and we knew we had a good chance to do it again this year,” noted Adam Carroll, University of Montevallo angler.  “We came up here and did it, and we couldn’t be happier about it.”

“Anytime you can win a Championship at any level in any sport, it’s always special,” added William Crawford, Head Coach of the University of Montevallo Bass Fishing Team.  “To do it back-to-back and be one of only three teams to do that, it’s really special.” 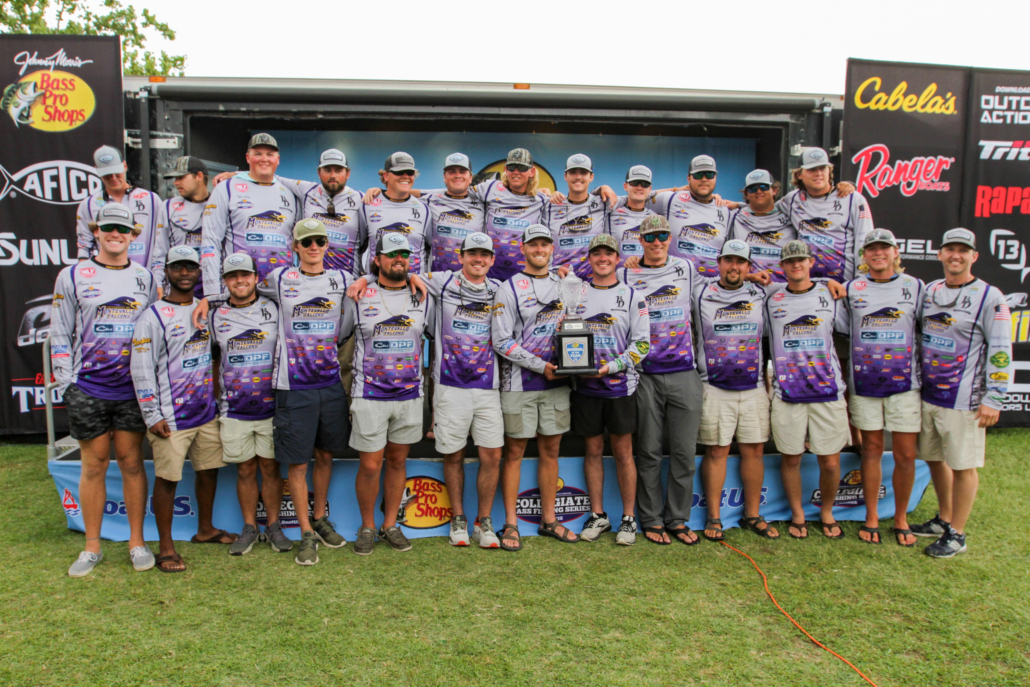 Montevallo’s 2021-22 season was full of high-water marks.  One of the most impressive achievements came at the 2022 Barnett Reservoir Rumble where the team earned the maximum possible points a single team could earn at the ACA double points event.  Merritt Arnold & Chance Schwartz and Adam Carroll & Trey Dickert finished first and second respectively to earn 2,490 points for their school.

Entering the 2022-23 season, Montevallo will be looking to become the first team ever to win the title in three straight years.  In order for them to do that, they will have to maximize the double and triple points opportunities on the schedule.  After capping off the school’s second straight title in as many years, the team’s focus now shifts to doing it again during the 2022-23 campaign.

“We’ve got a lot of great guys coming in, it’s our best recruiting class ever,” added Crawford.  “Excited to see what’s going to happen and see if we can’t win three in a row and become the first team to ever do it.”

The team is thrilled to know that their hard work and effort is being recognized by fellow anglers, coaches, media members, and industry representatives alike.

“Being ranked within the Top 5 is not only a great honor for our active members, but a testament to those who have helped build this team from the ground up over the years,” noted Carson Maddux, Auburn University Bass Fishing Team member.  “We strive to maintain our status as one of the top collegiate fishing programs in the country. It feels good to know that our hard work has not gone unnoticed.” 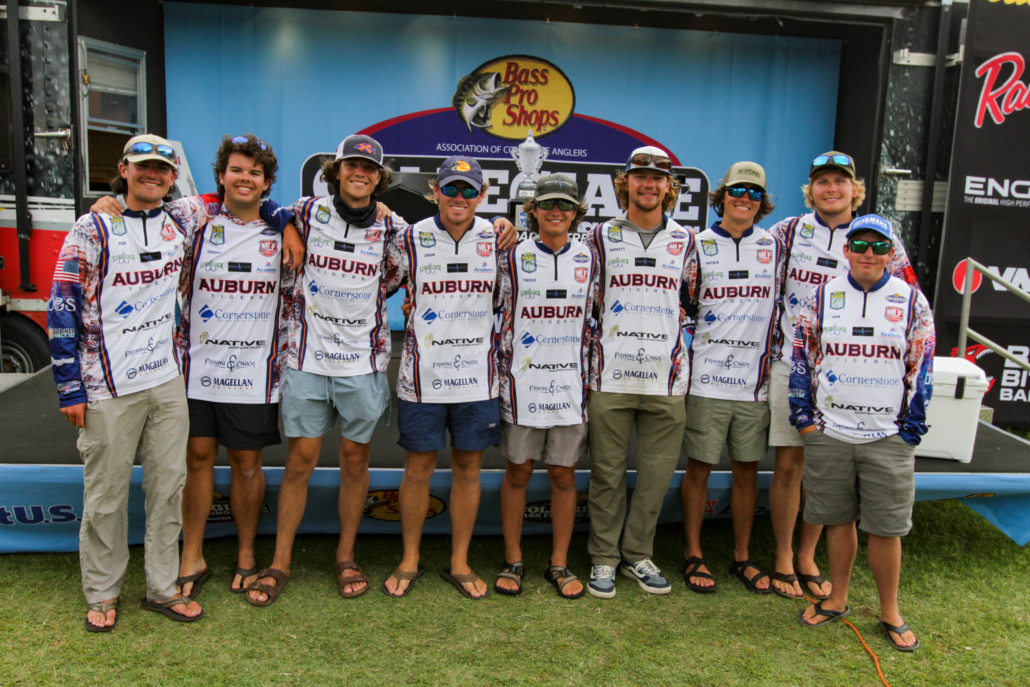 A former winner of the BoatUS Collegiate Bass Fishing Championship presented by Bass Pro Shops, Auburn University entered this past year with a bit of a chip on their shoulder.  The team encountered a few hurdles that limited the total number of events they could compete in during the 2020-21 cycle, resulting in a 15th place end of year ranking in 2021.  However, the strong finish to the season Auburn had that spring gave them the confidence they needed to go out and prove that they belonged in the conversation amongst the best teams in the country.  Auburn’s performances spoke for themselves, as the team amassed 18,080 points to finish the season ranked second overall.

Having been so close to winning it all last season, Auburn enters this year with just one thing on their mind…taking home the title.

“Our goal for the 2022-23 season is simple: Win SOY and Win the National Championship. Easier said than done, but our roster is full of talent and is more motivated than ever. This year marks the 15th anniversary of the team and there would be no better way to celebrate than bringing the SOY title home to the plains,” concluded Maddux.

“We are very honored that our McKendree team has been ranked as one of the top five schools in the country,” said Jon Rinderer, Head Bass Fishing Coach at McKendree University.  “It is very rewarding to know that our peers and industry leaders feel like we are doing all the right things to maintain a very solid program.”

Following a third-place finish in the 2021-22 season of the Bass Pro Shops School of the Year presented by Abu Garcia, McKendree University is ranked third in the ACA pre-season poll.

McKendree University has put together one of the best runs of any team in the nation over the course of the past seven years.

McKendree University competed in all three ACA events this past season, earning 5,655 points. 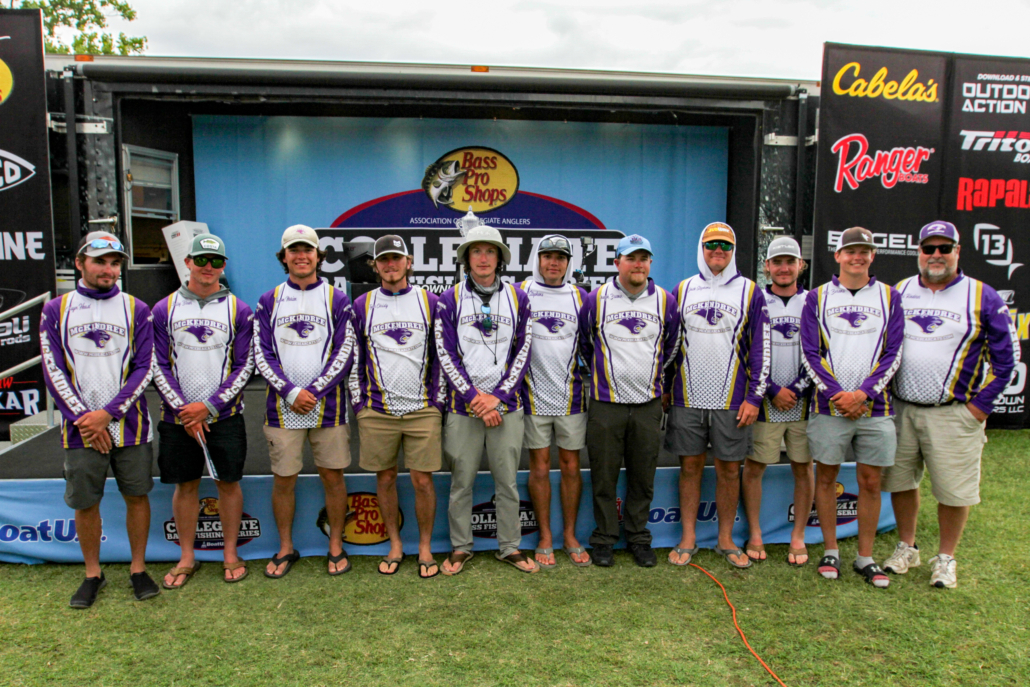 “With the new changes in the scoring mechanism, our primary goal is to have at least two solid finishes at every major tournament we fish and hopefully bring home another School of the Year Championship,” added Rinderer.

The next team to check in on this rankings reveal is Carson-Newman University.  The team from Jefferson City, TN receives a pre-season ranking of fourth, following a fifth-place finish in the 2021-22 race for the Bass Pro Shops School of the Year presented by Abu Garcia. 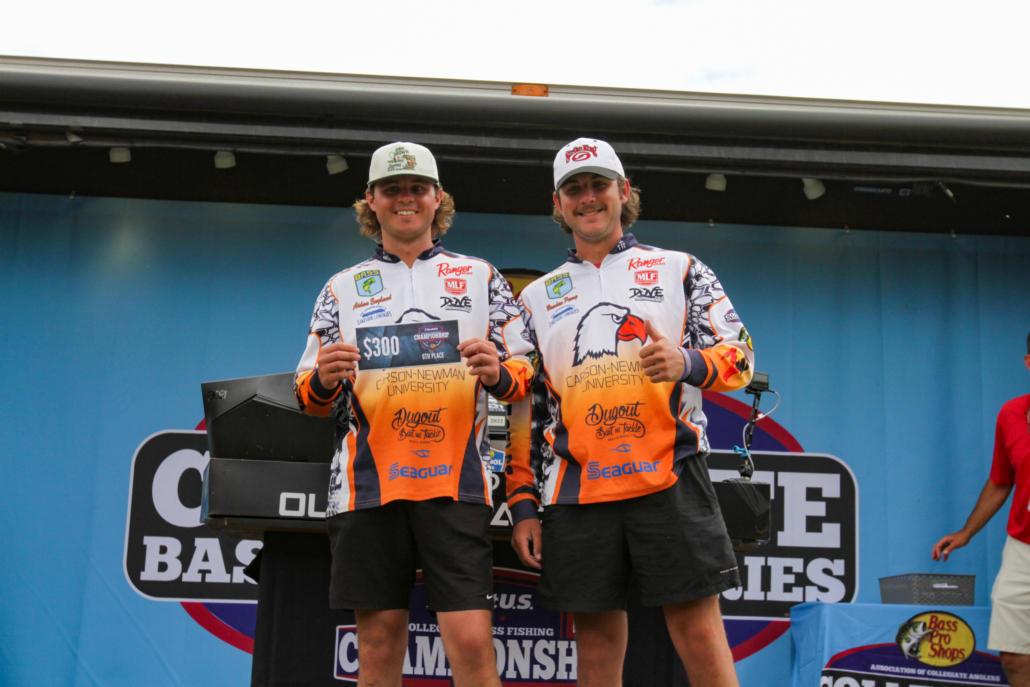 “It means the world to me and my program that we are considered a Top 5 team, especially because of how hard we all work,” said Ben Cully, Carson-Newman angler.  “Top 5 sounds really good, however we all know our capabilities and want to continue our goal to win SOY.”

Carson-Newman has been trending upwards over the course of the past five seasons, but did take a slight step back in 2021-22:

Entering the 2022 Barnett Reservoir Rumble ranked third this past April, Carson-Newman had attained the team’s highest ever ranking in program history to that point.  With a new season set to get underway, the team hopes to see the number one in front of their school’s name to finish the season.

“Our main goal, without a doubt, is to win SOY this year. We’ve got some incoming freshmen this fall that will definitely boost our talents,” added Cully.  “I believe our team chemistry is now better than ever and I’m hoping that will help overall communication and better finishes from Carson-Newman.”

“It means a lot that we are recognized as a Top 5 school in the country, it reflects the hard work and dedication of all of our guys year-in, year out,” said Matthew Davis, Adrian College Bass Fishing Team member. 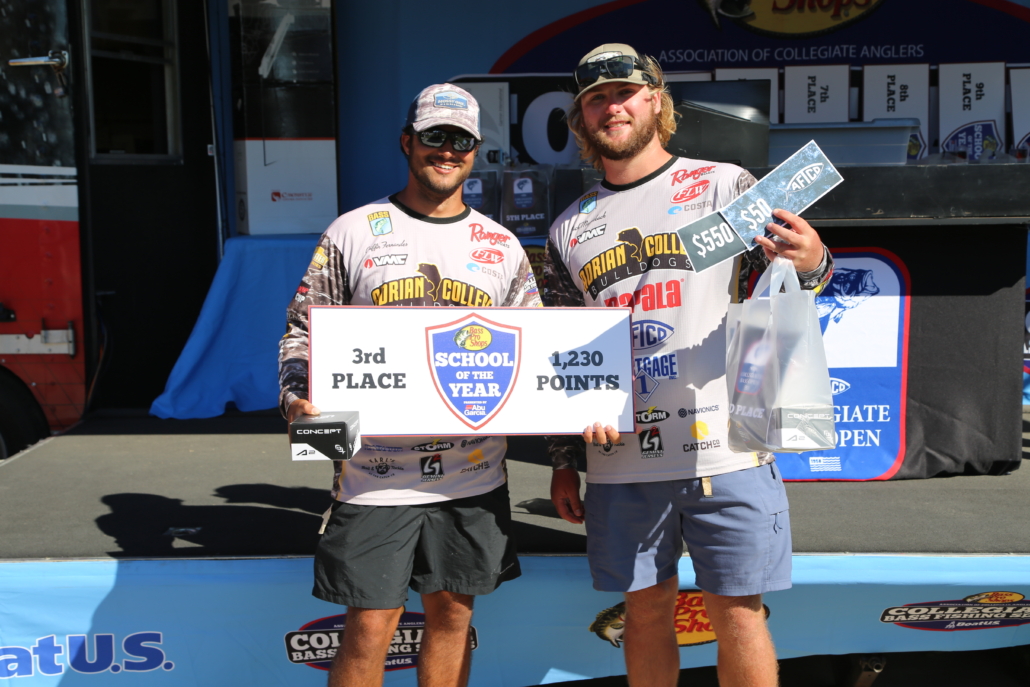 Along with consecutive years in the Top 5 for the pre-season poll, Adrian College has finished each of the last seven seasons ranked in the Top 20 for the Bass Pro Shops School of the Year presented by Abu Garcia.  After finishing in the Top 3 for the three previous seasons, Adrian College ended the 2021-22 campaign in fourth overall.

Throughout the 2021-22 season, Adrian College racked up major victories and top finishes at national events across the country.  Adrian College also had a team place in the Top 12 at every ACA event:

For Adrian College to break through and win the school’s first-ever title of Bass Pro Shops School of the Year presented by Abu Garcia, they will have to capitalize on the double and triple points opportunities available on the schedule.  Adrian College is a definite contender to end the year ranked number one.

Follow this link to view the complete results of the ACA Top 25 Pre-Season Poll, as well as see which other teams received votes by the pollsters.

Put Baits Where The Fish Are With SPRO’s New Deeper Running McStick 1...
Scroll to top