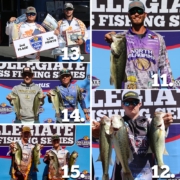 San Antonio, TX (7/20/2022) – The Association of Collegiate Anglers, which operates the Bass Pro Shops School of the Year presented by Abu Garcia, is excited to showcase the pre-season rankings for college bass fishing, according to a voting poll of top coaches, schools, media personnel, and fishing industry personalities with experience in college fishing.

This poll is a one of a kind poll, similar to rankings in other college sports, that will help kick off the season-long race for the prestigious School of the Year title.   Every day this week, the ACA will count down and showcase teams that made it into the Top 25.  Today’s article will show teams that were selected 11th to 15TH in the pre-season rankings.

The University of North Alabama becomes just the third past winner of the Bass Pro Shops School of the Year presented by Abu Garcia to check in on this year’s pre-season poll.  After finishing the 2021-22 campaign in eighth place, UNA has been picked as the 11th best collegiate bass fishing team in the nation.

“SOY has been a goal on this team for the past four years and starting in the Top 15 means a lot to us because it gives us a good starting spot to make that jump,” said 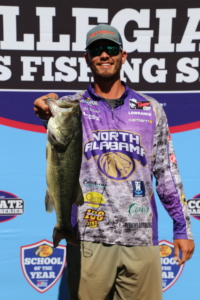 Benson Dowler, UNA Bass Fishing Team member.  “One major goal is to of course win SOY but another goal is a national title.  We have been close many times but this year I feel is UNA’s year.”

UNA has achieved multiple historic milestones on the Bass Pro Shops Collegiate Bass Fishing Series.  The school has won one ACA National Championship.  Sloan Pennington and Hunter McCarty won the 2017 BoatUS Collegiate Bass Fishing Championship presented by Bass Pro Shops at Picwick Lake.  Along with that national title, UNA is also a two-time winner of the Bass Pro Shops School of the Year presented by Abu Garcia.  UNA won the title in consecutive seasons; 2014 and 2015.  The team from Florence, AL is just one of three teams to have ever won the prestigious School of the Year title multiple times.

During the 2022-23 season, UNA will be looking to improve upon its eighth-place finish last year.  The team has a strong track record at each of the regular-season stops on the Bass Pro Shops Collegiate Bass Fishing Series, including a home field advantage at Pickwick Lake for the 2023 Pickwick Slam.  Look for UNA to perform well at ACA double and triple points events over the next 11 months to help propel them near the top of the standings.

The next team to be highlighted in this rankings reveal is Campbellsville University.  Campbellsville has been voted as the 12th best team in the nation.

Picked 13th in the first-ever ACA pre-season poll in 2021, Campbellsville went on to finish the 2021-22 season in 17th overall.  In the article for last year’s pre-season rankings reveal, we highlighted Campbellsville’s upward trajectory in recent years.

The 2021-22 season marks the first time in a while in which Campbellsville has failed to best the previous season’s end of year ranking. 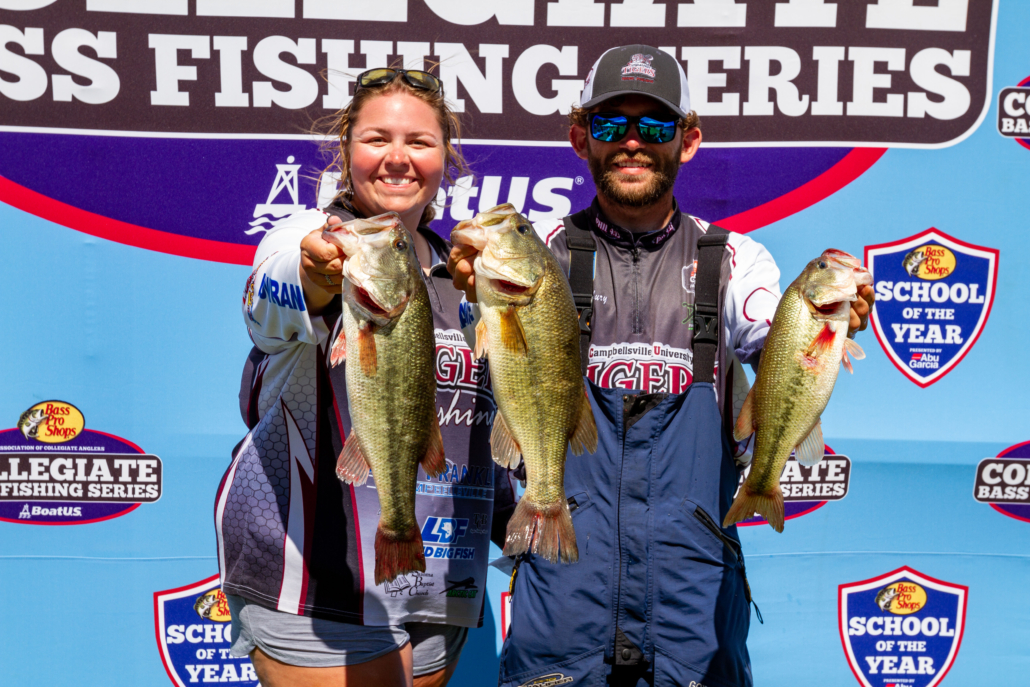 Entering the 2022-23 race, Campbellsville is primed to take a shot at cracking the Top 10 by year’s end.  A team that welcomed quite a few freshmen last fall, Campbellsville’s roster gained significant experience last season that should result in more success at each ACA tour stop this year.  As has been highlighted throughout the week, the ACA will contest two events at Kentucky Lake during this School of the Year cycle.  Given Campbellsville’s past history at this event and close proximity to the Tennessee River fishery near Paris, TN, the Bass Pro Shops Big Bass Bash presented by Berkley should present the team with a great opportunity at earning over 4,000 points from those two events combined.

The ACA will kick off its 2022-23 season in Paris, TN on September 17-18, 2022.  Keep an eye on Campbellsville University early on in the year as they hope to start the season off on the right foot.

“It means a lot for us to be ranked preseason in the Top 15 by our peers,” noted Teddy Peznola, President of the University of Tennessee Bass Fishing Team.  “As a student run club, we work hard to maintain the program and support that we have.  So ranking high each season is a reward everyone on the team gets to enjoy.”

After finishing the 2021-22 season ranked inside of the Top 10, the University of Tennessee has been voted the 13th best team in the Bass Pro Shops School of the Year presented by Abu Garcia. 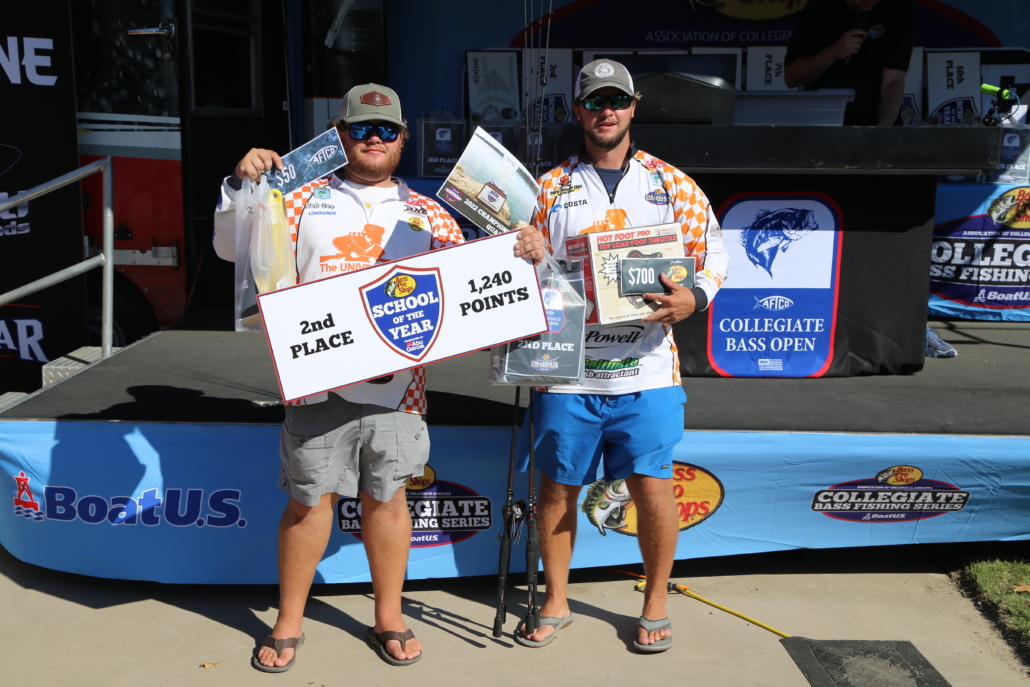 Key contributors to the team last season have since graduated and will not be on the team this upcoming year.  Can the team from Knoxville fill those shoes and accomplish back-to-back Top 10 rankings?  That is definitely the team mindset with a new school year set to begin in just a few weeks.

“This upcoming season, our goals are to stay in the Top 10 in SOY, and make a run at Top 5. That’ll take us sending as many boats as possible to each event and competing at our highest level possible,” concluded Peznola.

Checking in at 14th in the ACA pre-season poll is one of the blue bloods of college fishing that has yet to win the Bass Pro Shops School of the Year presented by Abu Garcia, Murray State University.

Murray State experienced a slight dip in production over the past year and a half or so.  The team from Murray, KY finished the 2021 season in fifth, and received a pre-season ranking last summer of seventh overall.  The team proceeded to finish the 2021-22 season in 13th, a place that Murray State is not accustom to in recent years.

“Last year was trial and error for the team.  We had a very large freshman class and many new faces that outnumbered the older students,” said Emily Freeman, Murray State University angler.  “This year we want to learn from our mistakes and go forward with this team.  We really want to get Murray State back into that Top 10 where we have been the previous years.” 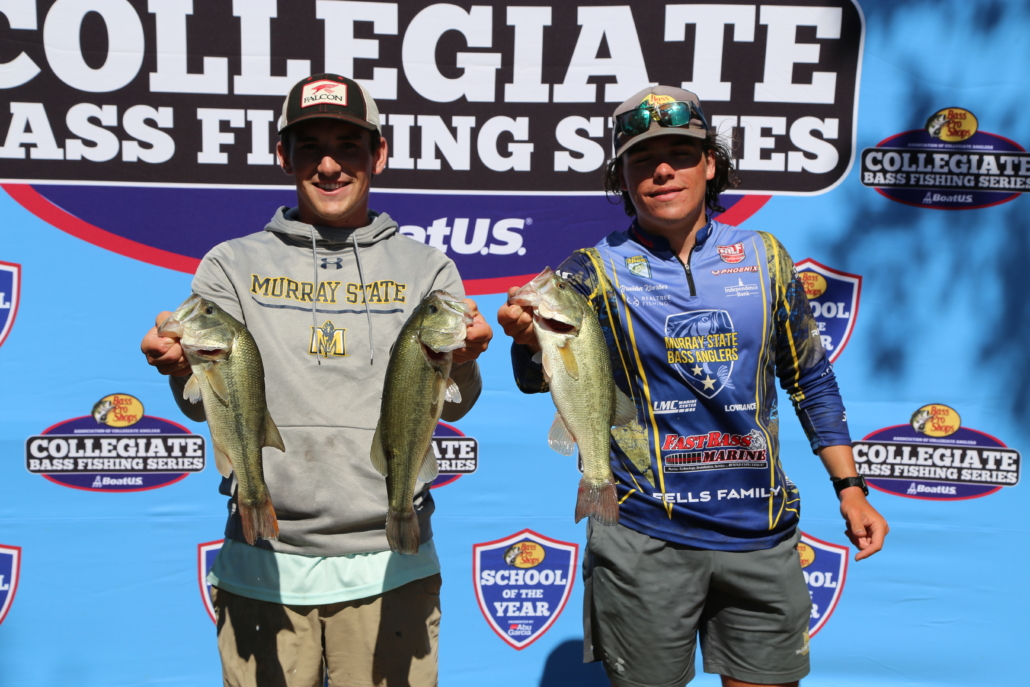 Murray State has every right to enter the 2022-23 season with a great deal of optimism and confidence.  The aforementioned freshman anglers have gained valuable experience, and the schedule favors Murray’s strengths and expertise.

Though things may not have gone as planned last season, the team is still humbled to be recognized by their peers as one of the best 14 teams in the country.

“As a Top 15 team, the program is very grateful for how the fishing industry views us.  As a student ran team, we do not get that input from a coach and to see the industry and our peers who have faith in Murray State is outstanding,” concluded Freeman.

Emmanuel College finds itself in familiar territory entering the 2022-23 Bass Pro Shops School of the Year presented by Abu Garcia.  After receiving a ranking of 15th in the first-ever pre-season poll last year, Emmanuel College has again been picked as the 15th best team in the country entering the upcoming year.

Emmanuel College has launched onto the scene in recent years, and is carving out its place among college fishing’s top teams. 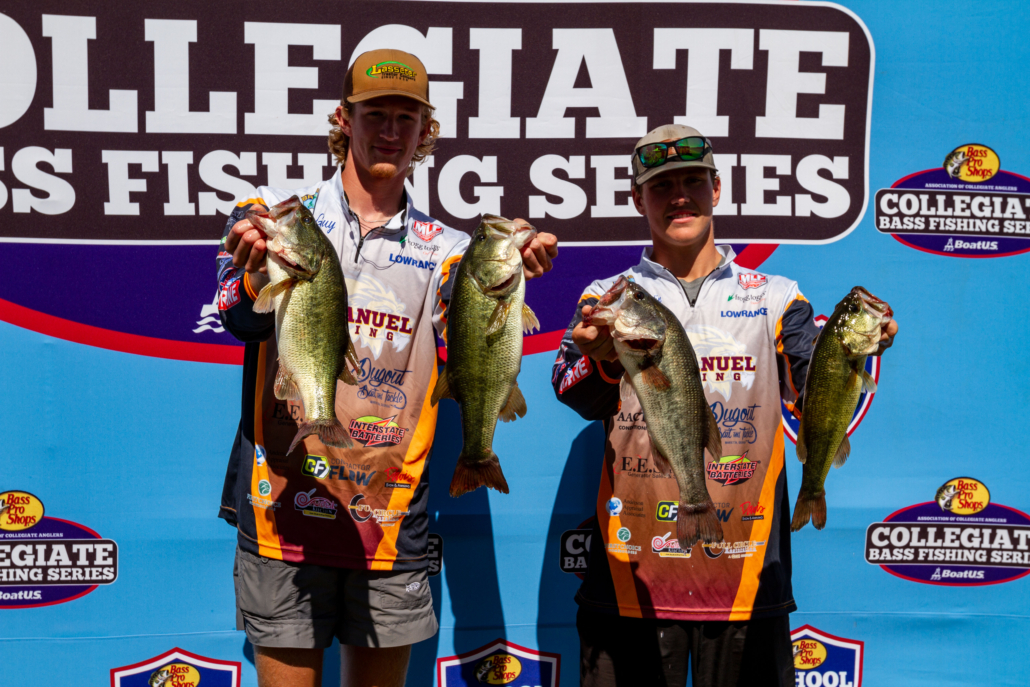 Emmanuel College competed in its first-ever ACA event during May 2021 by competing in the BoatUS Collegiate Bass Fishing Championship presented by Bass Pro Shops at Lake Murray in South Carolina, and competed in the ACA National Championship again this year at Pickwick Lake.

The Emmanuel College Bass Fishing Team is led by Head Coach Pam Martin-Wells.  For some, this name may sound familiar.  Wells has long-been regarded as one of the best female anglers in the sport.  Throughout her career, she has fished in major events all across the country, including the 2010 Bassmaster Classic on Lay Lake.

Emmanuel College has proven that it belongs on the national scene with college fishing’s top teams.  Their goal this season will be to finish the year inside of the Top 10 for the first time in program history.