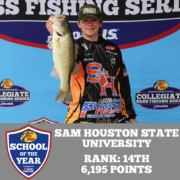 SAN ANTONIO, TX (5/5/2020) – The state of Texas has long been considered one of the best states in the country for trophy bass fishing.  Fertile lakes and rivers, along with a warmer than normal climate year-round, provide anglers with ample time throughout the year to hone their craft.  Because of this, Texas has produced numerous tour-level pros over the years.  Tournament competition at every level across the state is highly competitive, and that fact holds true in college fishing as well.

The top-ranked team from the state of Texas in the chase for 2020 Bass Pro Shops School of the Year presented by Abu Garcia is Sam Houston State University.  “It’s an awesome feeling to see our team acting on its potential,” noted Jace Garrison, President of the Sam Houston State Bass Fishing Club.

The Bearkat Bass Team is ranked 14th in the nation with 6,195 points.  Skimming through the school’s season results to this point, one interesting note jumped out at me.  Sam Houston State has earned points at only seven events this year.  For comparison, almost every other team in the Top 15 in the standings has fished a minimum of 10 events.  Of those seven events, the Bearkats earned more than 700 points at six of them.  That is the definition of consistency.

One of the major launching points for Sam Houston came at the 2020 Texas Lunker Challenge presented by Mossy Oak Fishing.  The tournament was contested on Sam Rayburn Reservoir, roughly 100 miles from the SHSU campus.  It is safe to assume that several members of the team have spent a significant amount of time on the famed fishery.  Their local knowledge paid off to the tune of 1,700 SOY points on tournament day.  Blake Castleberry and Logan Stewart finished 15th & 17th respectively.  That performance helped to cement the Bearkats’ place in the Top 15 for the Bass Pro Shops School of the Year presented by Abu Garcia.

With the BoatUS Collegiate Bass Fishing Championship presented by Bass Pro Shops on the horizon, Garrison and his fellow teammates at Sam Houston State University are ready to get back out on the tournament trail.  “Getting back to doing what we love.  We are all very competitive, but this one’s a little deeper than just winning.  Our whole team is just glad we can get back on the water after these scary times.”

Click here to view the current Top 25 in the School of the Year standings.