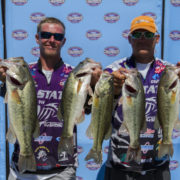 Just a little over a month ago, Kyle Alsop and his partner Travis Blenn took home the second YETI FLW College Fishing National Championship title for the Kansas State Wildcats on Wheeler Lake. The two then went head-to-head in order to find out who would punch their ticket to the Forrest Wood Cup on Lake Murray this August. Alsop prevailed and in just a few weeks will be fishing in the biggest tournament of his life.

We took some time to fire a few questions at the 23-year-old champ before he takes the big stage Aug. 11-13.

So, how’d you get started fishing in general?

My dad. Since I could walk I had a fishing pole in my hand. I more or less grew up living in a boat. My dad [Tom Alsop] started getting into tournament fishing before I was born, so had an awesome teacher. He and his partner Keith [Leftridge] are two local sticks so I had some great fishermen to learn from. When I was about 10 years old I really started getting into tournaments. Even when we went fun fishing, I still had to fish behind my dad and Keith who are really, really good fishermen and it taught me to think on my feet or I wouldn’t catch anything.

What’s it like to be the first person to win the B.A.S.S. and FLW college championships?

You go into every tournament with the mindset to win and we’ve definitely put in plenty of work before each tournament with map study and reading articles, no doubt about it. So, it is pretty special for that work to pay off. When Ryan Patterson won the FLW College National Championship right before I started at K-State I knew I wanted to win one for the college. That really drove me. Plus, my friends and family have supported me and it’s been an incredible ride. It gives me a little extra confidence at trying to qualify for the pro tours.

Now that you’re done with college, what’s the plan?

Well, I started full-time with U.S. Engineering about a year ago and they have been extremely supportive. I worked as an intern with them in college for a few years and I was lucky enough that it turned into a career.

Next year I plan on fishing both the B.A.S.S. Open and Costa FLW Series central divisions. I love working, but my dream is to fish and I’m going to do everything I can to get there.

Who is the best friend you made from college fishing that’s not from K-State?

Every tournament we went to we made a new friend from. I’m good friends with the guys from Winona State, Murray State and the University of Evansville to name a few. Those are the guys I Snapchat with, text with and check in with. They are just awesome guys.

I also met Daniel Montgomery, who is probably the best friend I made that’s not a tournament guy. He hooked us up with a guy named Ryan Methvin who loaned us a boat to use during the Collegiate Bass Championship a few years ago when we had motor issues the day before the event. We still keep up every couple of weeks and it’s unbelievable.

Riding to the fish-off with him in his truck. It was the first time I actually had time to sit and chat with him and he’s an awesome guy and a class act. The amount he does for the college guys is incredible. All of the college guys are very appreciative of him.

If you had to fish for any other college fishing team, which one would it be? Why?

Honestly, it would probably be Murray State or Carlton State or Auburn because they are centralized around world class fisheries. Any of the schools that are right in the heart of the major fisheries would be a fun place to attend and fish for.

Is the K-State Fishing program in good hands now that you’re gone?

Absolutely. We now have a new advisor who is all about doing anything he can to help us out. There are a lot of incoming freshmen who are very interested in the team now with our three championships in last five years. I imagine in next few years the school will be making a big push for college fishing with all the interest there is.

Do you have any superstitions?

Yeah, I do. But I’d say they are more little precautions you take. I check all my knots. I like to fill the boat up the night before a tournament, so don’t I don’t get gas on my hands. Not having a banana in the boat has stuck with me since I was a little kid. And the curse of putting a cull ball on a fish before you have a limit. That’s about it.

I’m always loaded down with water. I’m not a big eater on the water unless we got a sack. Peanut butter crackers, peanuts, or a candy bar maybe. Otherwise, I just focus on fishing.

The Forrest Wood Cup is the biggest stage in professional bass fishing. Do you feel prepared both mentally and physically?

Not gonna lie, since I won the fish-off I don’t go five minutes without thinking about the Cup. When I was younger I could be a head case and spin out, but I have gotten better about that. Not getting awestruck with who you are competing against is a factor, but I’m ready to roll.

On a physical note, I’ve got the body of a 40-year-old man from all the hours I’ve spent fishing, but you don’t think about that when your fishing. I love every second of sleep deprivation, being in the heat, driving on the road and catching bass.

No college angler has ever made a cut at the Cup. Will you?

If I can show up and compete like I know I have the ability to do, then we’ll see what happens. A lot of success comes in preparation on the front end, so I have an idea of areas and techniques to try. Fishing is a very instinctual sport and it comes with time on the water, so you gotta be able to adapt on the fly to be successful. I might finish dead last or not even weigh a fish, but you got to have the mindset that you’ll win every tournament. Can’t be afraid to take some chances and gamble a little.

11 Things To Know About Boat Trailer Tires
Scroll to top